WASHINGTON, D.C. – Hey ladies in the place, I’m calling out to ya. Maria At Bat has the week off so I’ve decided to pinch-hit with a little homage to women in sports. 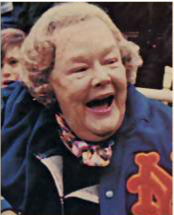 First and foremost we have to lead with the Mets very own Joan Payson. She was a minority owner of Sam’s-A-Fan’s Dad’s beloved NY Giants and sold her shares rather than approve a move to SF. Instead she fought vigorously to bring the Mets to life and succeeded in 1961 when she became the first woman to buy a majority ownership of a U.S. sports franchise. She was team president during the Mets first two pennants and first World’s Championship. Unfortunately, when she died her clueless daughter Lorinda de Roulet took over and let M. Donald Grant run the team into the ground. Therefore, I’m going to classify sportswomen as a Payson or de Roulet. 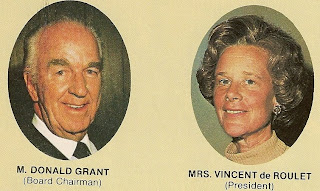 Babe Didrikson (Payson): The ultimate female athlete of her generation. Won two gold medals in track and field; eighty two amateur/professional golf tournaments and was named top female athlete of the first half of the 20th century. Had to hide the fact she was a lesbian.

Martina Navratilova (Payson): Best woman’s tennis player of all time. 18 grand slam singles titles says it all. Never hid the fact she was a lesbian.

Renee Richards (de Roulet): Richard Raskind competed as a male tennis player until 1975 when he had a sex change and became Renee Richards. Somehow Renee was allowed to compete in women’s tennis tournaments thereafter and even won the over 35 U.S. Open championship. Always looked like she was carrying an extra ball or two under her tennis skirt.

Marge Schott (de Roulet): Racist former owner of the Reds. She and George Steinbrenner would’ve certainly spawned Adolf Hitler Jr. (seen below) if they ever mated.

Danica Patrick (de Roulet): So she can drive a car and take off her top. Big deal. Give most women a top racing team, a good plastic surgeon and a slick p.r. firm they could be just as successful. Go Away Daddy.

Michelle Wie (de Roulet): The LPGA’s version of the segway. In Met terms, more hyped than Generation K with less results. Had the audacity to accept Nike forced invitations to men’s tournaments having never even won an LPGA event.

Jennifer Capriati (Dr. Payson and Ms. de Roulet): The ultimate Dr. Jekyll and Mr. Hyde of female sports. One year she is reaching Grand Slam semi finals as a teenage, the next year she is smokin crack in Florida flop houses and a few years later she is winning the French Open. Such a career path is now known as “pulling a Capriati”. If Lindsey Lohan gets an Oscar nomination she will have pulled a Capriati. Josh Hamilton and Mickey Rourke are two recent examples of pulling a Capriati.

Venus & Serena Williams (Payson): These women dominated ladies tennis for a decade while having to deal with their dad’s de Roulet antics. They weren’t popular on tour but that has as much to do with the tour being filled with spoiled brats of privilege than anything else. Saved the tour from being dominated by the Russians.

WNBA (de Roulet): The whole league is a joke. But I feel that way about the NBA as well. If they are such good basketball players why do they have to play with a smaller ball? Rare statistic, a Liberty game and an Indigo Girls concert usually have the same percetage of lesbians attending: 97%.

Julie Krone (Payson): Anyone who says jockey’s aren’t athletes has never ridden a horse (Superman Christopher Reeve unfortunately found that out). She won the Belmont Stakes and many other top races.

So here’s to Cookie, Mrs. Matt, Annie Savoy and Maria At Bat who would’ve made Joan Whitney Payson proud for their work on MTM.

This is by no means a complete list so please feel free to give me your Paysons or de Roulets of the sports world.