By Philview and the Phanatic

PHILADELPHIA, PA – Omar Minaya is misunderstood. He believes, in his heart, that he’s a great leader – a trailblazer – and that he’s doing what’s best for the Mets. He sees only marginal error in his ways, and despite a painfully long line of difficult weeks, his conscience is clear.

Unfortunately for Omar, he remains, from the vantage point of this site at least, the primary villain in the soap opera that is the New York Mets this year. But one wonders – does he see himself that way? Of course not. Villains and scoundrels, except in comic books and action films, rarely do.

There are, sadly, many precedents.

All wars, sorrowfully, have two sides – and recorded history always favors the victor.
For example, if the British turned back the American Revolution, weâ€™d have streets in Connecticut named after Benedict Arnold.

John Wilkes Booth thought he was killing a tyrant, and considered himself a war hero. He was stunned to learn – before his death in a fiery barn almost two weeks after Lincoln’s assassination – that he was a hated man.

Certainly, there are incalculable examples of famed men and women in history who simply didn’t get it, and “saw themselves differently.” We welcome your thoughts. As for us, here’s one more extreme case:

Last year, tattered scrolls from the mid fifteenth century were found buried beneath an old castle in Romania (in a historical area known as Wallachia). The castle was once the dark domain of one Vlad Dracula (1431-1476), or as he was more commonly known – Vlad the Impaler. Ever heard of him? Well, he was so despicable and blood-thirsty that Benedict Arnold, the author of Dracula, based the title character in part on this actual human being, or more appropriately, inhuman being. He wasn’t a vampire, of course, but his time on the throne was still rivered in murder.

Scholars soon discovered that the scrolls were, in essence, written transcripts of conversations held in the castle over 550 years ago. Once translated, the researchers found many, many discussions – mostly around home improvements, fine wine, and impaling. 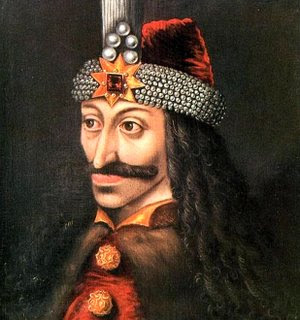 However, it is the exchange below in particular that peaked OUR interest. Another misunderstood leader? You be the judge:

“You’re kidding – the people call me Vlad the IMPALER?”

“Why do they call me this?”

“Gee, I don’t know, Vlad – maybe because you IMPALE them.”

“Look, you’re in charge of my public relations – can’t you do something?”

“Get them to call me Vlad the Nice Guy, or Vlad the Sweetie.”

“Yeah, like that’ll happen. Look Vladdie, every day I’m out there busting my butt for you, doing spin control, but you’re frickin’ IMPOSSIBLE to keep up with. I put out one fire, and then you start another.”

“Vlad, you kill townspeople – and then hang them out to dry like laundry.”

“Okay, so I get a little wild and crazy sometimes. I’m a free spirit; a maverick. But I’m a king, man – and kings have to make the tough calls. Alright, I’ve put a few people to death; you got me there – but it’s part of the job description, everyone knows that. And besides, what are we talking about – a few here, a few there – and only the ones who committed terrible crimes, right?”

“Um, Vlad, bubby, may I remind you – just last week you impaled 30,000 merchants for disobeying trade laws. That’s right – murdered them, and impaled them, for trade laws. And then you left their bodies, for all to see, outside the city walls to rot.”

“And your point is?

“My point is – that was BAD, you idiot! I’ve told you a thousand times, impaling makes you a tough sell. Endorsements? You can kiss â€˜em goodbye, pal. I’ve taken a few informal polls, Drac, and believe me, those little stunts of yours aren’t goin’ over too well with the regular folks.”

“Vlad, the black plague was more popular than you.â€

â€œAre you suggesting I change my image?â€

â€œGee, ya think? Look, if you want to be fashionable, you donâ€™t take your season-ticket holders and stick ’em on a fence like sis kabob. You donâ€™t decapitate them, gouge out their eyes; skin them, boil them, and dismember them â€“ all for your own amusement.”

“But what will I do for a hobby? I’ve never been much of a reader.”

â€œVlad, Iâ€™m leaving. Do you mind if I just take this huge flask of wine with me?â€

â€œWait, before you go – are you saying that everyone in the kingdom hates me, or just the men? Its human nature, you know; guys are so competitive. Dudes are jealous of me. Now, what about the lovely ladies? THEY love me, don’t they?”

“Vlad, its common knowledge that you ALSO happen to enjoy torturing and killing women, so there’s your answer. And there’s a rumor going around that you – and I can barely say this – drink the blood of your victims.”

“Hey man, it was a frat party – things got a little out of hand.”

â€œImpale me â€“ itâ€™s less painful than working for you.â€