ARCADIA – I saw a “Phillie” win a World Championship on Saturday. No, Iâ€™m not beating a dead horse here, it happened at Santa Anita Park, in an event that deserves some recognition on this site full of degenerate gamblers and that endangered species known as the Rail Bird. 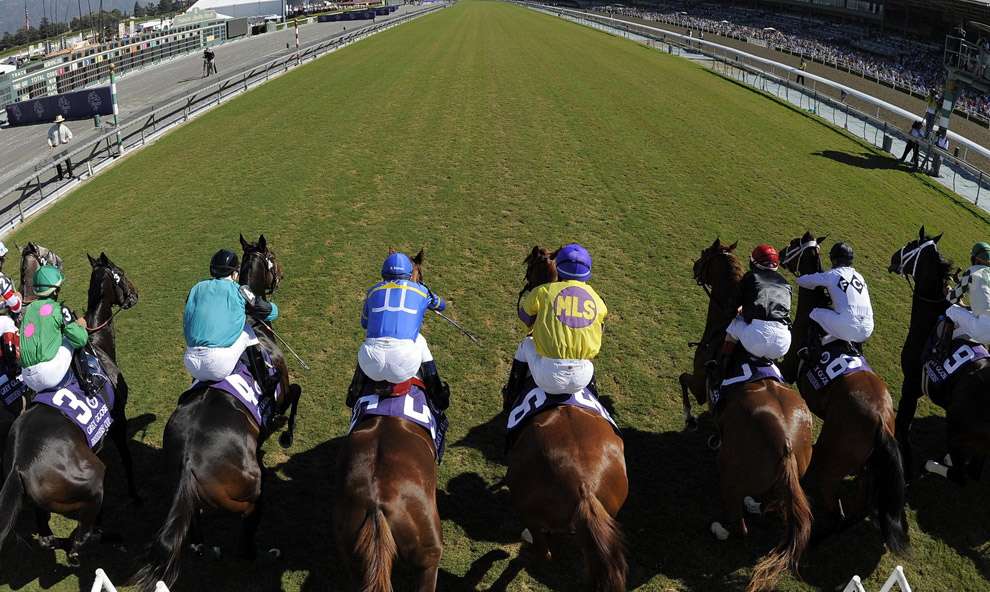 Let me preface this by stating my love for the track. I learned to read a form while working as a Pinkerton up at Saratoga one summer in college, had my ubiquitous beginnerâ€™s luck betting on Angel Cordero
in every race, and instantly fell in love with the whole thing:

And all of this gets you thinking:

‘Nothing else is working for me today, I might as well bet on the one with the funniest nameâ€¦’

The cheapest tickets to this yearâ€™s World Series were at least $500, and going to this yearâ€™s Super Bowl will run you close to $2000 at least. General Admission to the Breedersâ€™ Cup, the preeminent horse racing event in the world? $10. Parking $10. Kids are free, so pack up the family and head to the trackâ€¦ And this year, as last, that track would be the gorgeous Santa Anita Park. So, yes, I packed up the family, my crew of MTM Video Crew/Interns, and headed to Arcadia around 10:30 AM (the first post was at the unholy hour of 10:35). Fortunately for us – if unfortunate for the business – the lot wasnâ€™t very full. Horse racing has been hit pretty hard by the economy and by a general malaise of un-hipness thatâ€™s been slowly building since its hey-day in the fifties.

Still, we were taken aback by what looked like a pitiful turnout (Iâ€™d been to the Breedersâ€™ Cup here before and once at Hollywood Park and it was always packed). But it was early and this is Los Angeles, where itâ€™s fashionable to show up a few innings or races in, especially when the main event, The Classic, wasnâ€™t until 3:45. Not that I was complaining; there were few lines at the windows or beer stands or the BBQ grill, and plenty of room in the wide open infield (one of the things that makes Santa Anita unique). We perched ourselves on the grass near the back stretchâ€”a fine strategic choice with beer, food, bathrooms, and windows all nearbyâ€”and my crack cameraman took some great footage, like this:

Breeders’ Cup 2009 from youdiejoe on Vimeo.

This is from the eighth race, the Breederâ€™s Cup Turf – a fantastic mile and a half run that starts up the hill, comes down and crosses the dirt, then circles the entire track. The six horse in front here heading into the far turn – Presious Passion, the American horse in a field of highly favored Europeans – miraculously hung on to the lead before eventually being taken down by the Irish favorite, Conduit, the BC Turfâ€™s defending champ. The place and exacta I had with them put me in the black, though, and paid for my bets on The Classic.

Like the NFL, itâ€™s a sport driven by gambling; only horse racing actually encourages you to do so. The Racing Form can now be purchased on-line the night before for almost half the price youâ€™d pay at the track and is full of interactive features and even video clips of past performances. When I first moved out here a couple of my friends and I would attend Sunday seminars given by honest-to-goodness successful, professional handicappers for free. The main thing I learned: Unless youâ€™re going to do this every day and keep diligent, detailed notes while mastering complex formulas for divining the overlays, youâ€™re just hoping to get lucky. Of course they want you to bet, but itâ€™s not like Vegas where youâ€™re going against the house – youâ€™re actually going against everyone else in the track. The track just takes a commission and nothing makes you feel smarter than beating 50,000 other people who just had to bet the 4-5 favorite.

The Kentucky Derby and the other Triple Crown races get a lot of play but frankly, I think theyâ€™re all hype. Theyâ€™re just kids, three-year-old horses whoâ€™ve had but a handful of semi-decent challenges, if any. Sure, there are a lot of funny hats and mint juleps – the blue-bloods throw a painfully un-hip party – but itâ€™s basically like watching a college bowl game. Yes, it can be exciting and occasionally a winner will pan out in the pros, but more often than not they donâ€™t. This yearâ€™s Classic featured a couple of Triple Crown contenders, including Kentucky Derby winner (Preakness: Place, Belmont: Show) Mine That Bird and Belmont (and Travers) winner Summer Bird. They turned out to be Vince Young and Jamarcus Russell.

Itâ€™s The Classic, so itâ€™s automatically a strong field. But outclassing them all was a girl. Zenyatta was 13-0 coming into this, over half of those G-1 races. Trainer John Shireffs didnâ€™t waste time on the condescending-sounding BC Ladies Classic the day before, throwing her in with the big boys, instead. And she didnâ€™t just win, she won in amazing fashion. If horse racing needs a boost, not just a new gimmick but a new star, this is her. The crowd, which indeed packed the place by that point, was clearly here to see her. There were lots of pink â€œGirl Powerâ€ signs everywhere you looked. I of course, threw her out of my betting scenarios (The peopleâ€™s choice should never be yoursâ€¦ This ainâ€™t a craps table!), but knew this had a feel that went beyond the wagering. It seemed to plug into the publicâ€™s imagination, transcending the sport.

The tension was ratcheted up even higher when there was trouble at the gate and one horse refused to go in, bucking and twirling, the crowd oohing and ahhing with each jump until the jockey had to get off and the horse had to be scratched. When it started Trevor Denman began his always lyrical call. Zenyatta got off to a terrible start (only Mine That Bird was behind her when they went by us heading into the far turn), while predictably, Regal Ransom and his stablemate Giralomo, set a fast early pace. This at no point seemed a foregone conclusion but Iâ€™ve been to a lot of big races in my life and Iâ€™ve never heard a crowdâ€™s roar this loud, this excited, as when she went to the outside down the stretch. It was pure frenzied delirium that took over. It built and exploded when she won and continued on at that pitch for minutes afterward, something you never see. This was star power.

Now, obviously Iâ€™m a West Coast guy, so Iâ€™m partial to this Filly and I just have to ask: In the biggest race of the year, where was Rachel Alexander? If the NHRA wants to reverse its downward trend, theyâ€™ve got to get these two together soon. And when that happens, you ought to watch.