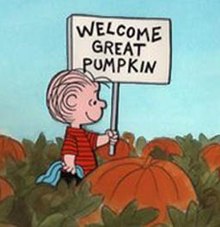 New York, NY – I had no idea what to write about so I figured I’d scribble down a few notes from watching two kinds of Rangers games, and It’s the Great Pumpkin, Charlie Brown yesterday, which if I must say, gets better every time I see it.

First, the Rangers I care about: The New York Rangers started their season in Scandinavia, where they lost two games, but picked up two points. From northern Europe, the Blueshirts traveled to western Canada, with a brief stop – and a loss – out at the Mausoleum in Long Island. The western Canada trip usually means guaranteed losses in Calgary, Edmonton and Vancouver. But this time the Rangers managed to win two of those games and also picked up a win in Winnipeg on their way back east, all thanks to some stellar play from Henrik Lundqvist in net.

The Rangers finally came home yesterday for their first game at the new-look Madison Square Garden. Like the Hangover 2, Last nights Rangers game was the same story with a different backdrop. The Blueshirts have had a torrid time generating offense so far this season and their power play, as always, is anemic. Like Short Matt, The Rangers are getting very few scoring opportunities. When your goalie is your best player, your team is in trouble. Its going to be a long season for the Rangers and us Rangers fans out there. The Rangers are the antithesis of The Great Pumpkin. They get worse every time I see them.

Next, Rangers II News: Over in St. Louis, the Texas Rangers and Cardinals both tried their darnedest to lose. In the end, the Rangers wanted the loss a bit more. It was a thoroughly entertaining game and it will go down as a World Series classic with the Cards down to their last strike twice. But the game was not well-played or well-managed. There were five errors in the game and some of the decisions made by LaRussa and especially Ron Washington late on, made it seem like both managers were trying to throw the game. So we go to a game 7, which I guess is fitting since I didn’t think the World Series should end with such a sloppy game. Let’s hope tonight’s game is another good one, whomever ends up winning.

Finally, the other-side-of-the-pond Rangers: Chelsea and England captain John Terry (white guy) is in some boiling hot water for allegedly racially abusing Queens Park Rangers defender Anton Ferdinand (black guy) last weekend. John Terry, if you may recall, was the guy who got into trouble a couple of years ago by banging his best friend and teammate Wayne Bridge’s fiancé. But other than those couple of misdeeds and a few others, Terry’s been a stand-up guy and a true ambassador for soccer and English people in general. Alexander Boris de Pfeifel Johnson should be proud.

That’s it for me today. Only a matter of weeks until A Charlie Brown Christmas is back. And only one day until The Public Professor is back.