NEW YORK, NY – After watching NY1 religiously until switching to RCN in our new joint last month, we realized how much we missed it. See, one doesn’t get NY1 unless they subscribe to Time Warner. No Dominick Carter. No Wiseguys.

No Pat Kiernan and his Canadian Way.

That’s just too much of a void! So we took matters into our own hands and we started conjuring up the headlines we imagined Pat Kiernan might be reading to his viewers. Sure, we could have easily gone on the NY1 website or simply looked online for the loacal headlines but we felt our way was better. Moreover, yesterday was a surprisingly good day for sports (unless you’re a Met fan), so we’ll wait until Saturday to post what we were originally going to put up and give today give you the first rendition of our new/ripped off segment; SHOULDA BEEN HEADLINES:

HAWKISH CHICKENS FLY COUP: The Atlanta Hawks should change their name IMMEDIATELY. After their mascot, a real hawk named Spirit, felt like cruising the arena a bit more than usual, the game started with him perched on the scoreboard. He flew around a while, to the fans’ delight, until the players realized he was up there. The Atlanta Chickens then refused to continue playing.

HIGH SCHOOL TEAM GOES DISTANCE WITH BOMBERS: The New York Hankees took about 14 innings to beat the Oakland/Alameda High School, in a cold, rainy matinee. We’re not quite sure how many innings it took because we kept falling asleep – no offence to Andrew Bailey, Trevor Cahill, Santiago Casilla, Dana Eveland & Sean Gallagher. Billy Beane needs to read this cool book called Money Ball. It will help him straighen that team out. P.s… The A’s site has a photo of A’s highfiving at the plate despite their grueling loss. jgclancy, your club stinks. P.s… Anytime the Yanks complain, feel free to call them the Hankees… Put that in your pipes, Cookie, Yankee Joe, Rex, WCC and Mrs. Matt!!!

GARDEN ALIVE DESPITE DOLAN DEATH MARCH Jim Dolan’sMadison Square Garden is alive again, thanks to the NY Rangers & www.MeetTheMatts.com. If you have a pulse, last night’s game was as riveting a sporting event there has been at The Garden since Isiah fondled the now-rich assistant. It was Stanley Cup-esque. 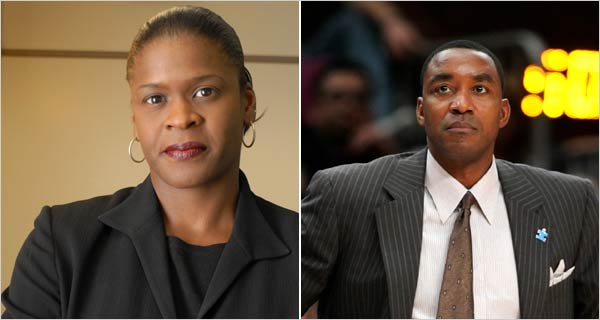 They could have been good together…

METS MIGHT SUCK, BRACE YOURSELVES: Mets.com didn’t see last night’s Met game. If they had, their headline would have been like ours. Instead, they had this one, and not all in CAPS: Mets quieted in support of Maine in St. Louis. What kind of froggin’ tile is that?! Hey, we wear rose-colored glasses like nobody’s business but COME ON!!! Don’t try to assuage a Met fan! Good golly! Lord knows we can weather whatever nonsense you throw our way. Instead, just give us more Razor Shines. That guy gave a Bill Clinton-esque interview last night. He looked us right in the eye, told us like it is with Daniel Patrick Murphy and then said,

“You can play this back at the end of the season but believe me, we’ve got a good ballclub and we’re gonna win this thing.”

We know he’s lying through his teeth, but he’s so charming our blue hospital pants fell off…

PIRATES CONQUER FLORIDA: No, this wasn’t another group of predominately minors firing T-Shirt Canons at ships on the High Seas for millions, it was a much more maligned crew: The Pittsburgh Pirates. Who?! You know, John Russell’s scalawags! Who the bunk is John Russell?! Damned if we know but the guy kept the Mets from being out of the race in April by leading his Bucs to a sweep over the red-hot Marlins. Met fans can post thank you notes here – and you should also thank the Flying LaRoche Brothers for anchoring the Pirate ship.

That’s all for today, Sam’s-A-Fan Friday coming at you tomorrow! P.s… Please tell people about MTM.

PAT KIERNAN’S In The Papers: