CABLE TV IN LIVING ROOM, USA – Yowza, yowza, yowza! This Cable TV thing is crazy! Since we just moved into our new digs, we had to make a choice between, Time Warner, RCN, Verizon Fios and Dish TV. We were going to PIRATE
cable but didn’t want the U.S. Navy coming after us. By the way, can’t a good ol’ fashioned cannon fend off these pirates? How’s about a couple of bullet holes in their skiff?
Shirley our guys…

Can sink these guys… 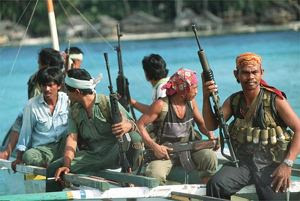 Yet we digress… So – For various reasons, we went with RCN’S Triple Play, although we don’t use the Land Line – who decided Home Phone wasn’t good enough – the same clowns that started calling Heavy Rain a Nor’easter??? Anyway, despite the loss of NY1 and our pals, Dominick Carter, Canadian Pat Keirnan, Roger Clark (Met/Jet fan) and Luis Dodley, we opted for RCN over the other finalist, Time Warner. Why? Because there was more wiggle room on price, we don’t trust Verizon and TW’s Dolan’s have ruined the Knicks. Funny thing, though, the price that you’re quoted is NOT the price on your bill. You find out that things like the DVR WERE NOT included and taxes and fees bring your total from the perceived Franklin and Grant to a Franklin, Grant, Jackson and Hamilton. Funnier still, is that if you want to downgrade to a Double Play – we wanted to eliminate the Land Line, the cost goes up! Stay tuned – pun intended. Anywho, now that we have it – we love it! We’re addicted to the sports channels in the 900s – especially ALL THE BASEBALL GAMES . Not only were we able to watch Texas’ Kris Benson feed meatballs to the ravenous Tigers – but we could watch it with either team’s announcers! And aside from the Yanks and Mets, we also watched Wisconsin Walt’s Brewers rally against Sweet Lou and the Cub bullpen, Philthydelphia’s rousing comeback vs the Braves and the Padres make the Giants look small. Therefore, we feel fully qualified to share the following Rex O’Rourke/Larry King-esque observations with you:

Edison Volquez and Harpo Marx were seperated at birth. There is NO RELIEF pitching beyond two quality innings in all of baseball. With the DEARTH of starting pitching, that will make for LONG games. For that reason alone, BEER should be sold after the 7th inning. Carlos Lee will NOT be smiling this year because he will NOT see ANY good pitches to hit this year for Houston.

Willie Randolph is a bench coach in Milwaukee. No offence to Wisconsin Walt, but that’s like Eliot Spitzer being Attorney General of Sheboygan.

Ken Griffey, Jr., Adam Dunn and Luis Castillo all lost 15+ lbs in the off-season because they want to make a good impression. Why the TILE didn’t they come into camp in shape last year, when they were making BIG BUCKS as well?

Our buddy Shawn Hill has battled back yet again from arm woes. Now with the Pads, he beat Barry Zito last night! Zito, we might add, has apparently given up:

Finally, The Cincinnati Reds have a gun-toting, crazed and mustachioed Mr. Met Impostor terrorizing their fansr stands and we want to know why?!

That THING must scare the Ellis Valentine out of any kids.

That’s all for today, please chime in below, look for our new bit and check in with Rex O’Rourke tomorrow.