“Cooperstown is a great place. You just can’t get there.” –Ralph Kiner in re to Cooperstown’s geography, not the Hall Of Fame’s selection process.

On the map, Cooperstown, NY is somewhere west of Schenectady. Schenectady is somewhat north and west of Albany. To get there from NYC, you pick your poison: Drive further north on 87 to get 88 or take the rinky-dink roads through Leeds, Durham and Cairo up to Cobleskill and spend less time on *88 – which we’ll mention again later.

While getting there may be a chore – especially if you leave midtown Manhattan at 4pm on a Friday – getting to play on Doubleday Field behind the Hall Of Fame is an obstacle worthy of MacGyver and Captain James T. Kirk

Anyway, obtaining the privilege to throw a baseball in anger on the HOF’s hallowed grounds will not just set you back $500 ($100 up from last year) for 3 hours of playing time – without umpires. It will also cost you incalculable angst. See, your permit application must be sent by regular mail, post-marked no sooner than January 5th and have 10 choices selected for your potential date. Three games are played daily; 8AM, 1:30PM and 5PM. There are no lights. You cannot simply ask for 10 dates – you must pick 10 slots. For instance, if you pick July 10th, you must designate one of the starting times. That’s one of your ten choices. That’s not too difficult, right? Pretty straight forward… The problem, however, is that this lottery doesn’t give those of us making this sojourn year after year any clout. Despite our being loyal, respectful, reverent and downright entertaining those stopping to watch, we get tossed right back into the lottery without any weighted chances. Oh, and did we mention that the Village Office doesn’t know their BOOKED dates until AFTER you submit your choices? That’s right, all ten of your choices could conceivably end up unavailable due to certain promotional games, tournaments or ceremonies. So after you drive to Utica in the wee hours of January 5th to get your regular mail envelope post-marked as soon as the Utica Post Office opens, you then must wait until a nondescript letter comes back in Mid-March telling you of your Doubleday date – or not. Those of you familiar with Cooperstown are probably wondering why we don’t use the Cooperstown Post Office, which is right next to the Village Office. Uh, for whatever reason, the mail gets processed through Utica, not Cooperstown. We learned that the hard way one year – IN A BLIZZARD.

Okay, so you get lucky and you get your date. Ours was June 27th at 1:30PM – PERFECT. All we had to do was hope for a dry day – an absolutely dry day. Sahara dry. For if one little drop should fall on the Hall Of Fame field…

The Soup Nazi from Seinfeld looks like Winnie The Pooh next to Groundskeeper Greg of Doubleday Field – and rightfully so. Playing in this ballpark is like having a BBQ on Sioux Burial Grounds. G.G. (Groundskeeper Greg) even has weather radar in his little supply room, in the stadium’s underbelly. Think Bill Murray in Caddyshack, sans the sense of humor and fully caffeinated – that’s G.G.

It rained SATURDAY MORNING. At 12:30 PM, the sun was out. The field looked playable. Heck, we even had an hour to make it nice-nice. NO GO. The frogging weather radar showed potential precipitation all day. GAME CANCELED.

That’s when Brett The Local stepped in and showed us the Promised Land. Brett is a 20-something, Mark Prior lookalike who makes bats across the street from the Hall Of Fame. He made one for one of our guys, Irish Ray Dominguez, on Friday. They shot the shat and Irish invited Brett to play. Brett, a baseball lifer and native of Cooperstown, readily accepted. With our long faces scraping the Doubleday Field gravel, Brett said – and we’re paraphrasing:

“I know of a place where we can play. We can play as long as we want. Nobody will tell us to stop. Follow me. Trust in me.”

With that, our line of cars, which some mistook for a funeral procession, followed Brett down route 28 to the tiny town of Milford. 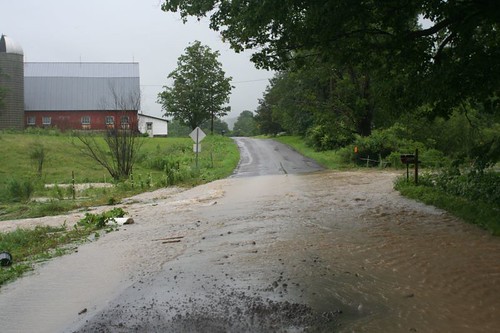 We banged a louie down a road oddly named Dave West road (Frank Viola is jealous someplace), to a frogging Field Of Dreams – replete with dugouts, impeccably manicured grass and clay and surrounded by trees. Moses may have parted the Red Sea, but Brett trumped him.

There were some puddles but we got down on our hands and knees and got our hands dirty like Captain Kirk – we had no tools.

And then, with Brett’s blessing and after much agita and angst we played baseball. Good ol’ fashioned country hardball. Choose ’em up and play baseball.

9 innings of laughs, errors, hit batsmen, stolen bases, broken bats, inflated and deflated egos and sore arms. And it was great! We played for hours. Guys had their kids as batgirls and batboys. The wives and girlfriends giggled, pointed and took pictures and we all remembered again – because we’d all forgotten – how great the game is when it is at its purest; its simplest. It was a lesson in humility -one that those aspiring to Cooperstown should learn in Cooperstown.

*We got a flat on the way home on route 88. One problem – no jack. Triple A found us about 2 hours later.