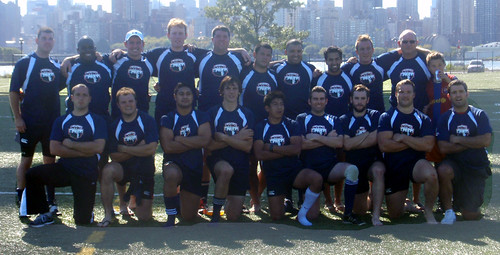 THE ISLAND FORMERLY KNOWN AS WARD’S, NYC – Most of our readers might think Ward’s Island is some new fictional place lorded over by our own Angry Ward, who answers his readership’s high expectations here every Wednesday. Most New Yorkers have some vague idea of what/where the isle is and usually associate it with a Funny Farm, a Looney Bin (photo below), if you will.

But for those in the know, Ward’s/Randall’s is a place teeming with runners, bikers, skaters, soccer games, tennis players, flag football, real football and… Rugby. And rugby, as you know, gets our motor going.

Look, it’s one thing to watch our silly Rugby videos or watch some short clip on YouTube – it’s another to stand on a sideline, WITNESS the game’s physicality and HEAR the contact. If you like watching well-played, physically demanding team sports – FOR FREE – go to Randall’s Island on any Saturday this Fall, preferably when the New York Rugby Club plays. (Click this for their schedule).

Granted, when it comes to Rugby, we’re homers for the NYRC like we are for the Mets in baseball and the Giants in football and the Rangers in hockey. Moreover, Different Matt and Short Matt and a myriad of Pinch Hitting Matts have come from the NYRC. Maybe it’s got something to do with it being the oldest club in the USA (est 1929), or the cool world-wide trips that we get to go on or the international flavor the team has -that’s not the point. The point is that you should go and watch some rugby – it’s not hard to find, wherever you are. Here in NYC, you can park for free, bring your lunch and beverages, get the best seats in the house and pick what games to watch. It’s kind of like the U.S. Open without needing passes and actually being able to cheer and talk and whistle during play.

Plus, you’re ON THE SIDELINE. Think about that. Imagine being on the sidelines for an NFL game. Players are getting tackled at your feet, injuries are being attended to, strategies are being discussed – all under your nose. That’s cool. Is the rugby you’ll be watching the same as watching an NFL game – no. But it’s high quality rugby and you will not be disappointed. As for not knowing the game, you’ll pick it up within 10 minutes. In the meantime, the odd stitches, the bone-crunching hits and the athletic maneuvers will keep you entertained. So will the beverage of your choice; we prefer Toohey’s New or Dunkin’ Donuts Hazelnut Coffee. 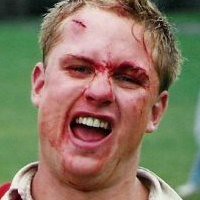 RUGBY BOB, who owns a great restaurant with a wanting website.

Indeed, there was A LOT of rugby being played on the new Field Turf fields – which are easier on the body but eliminate dirt and mud – which is a bummer because you’ll no longer see images like this of the Connecticut Greys and NYRC’s Gents Of NY: 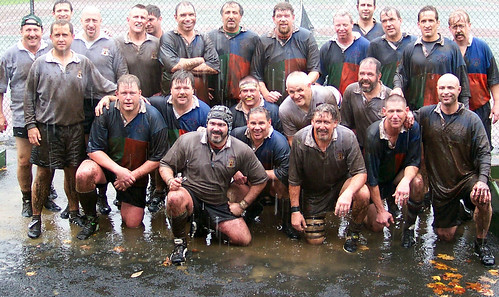 But what these new fields fail to yield in terms of good ol’ fashioned grass stains, they save on injuries. Manhattan fields were notorious rock piles prior to the new fields being installed.

As for picking which teams to watch, you can’t miss watching the NYRC Men or Women, elite rugby players that can play with anyone – anywhere. They will break your heart and snap your spine with a hard tackle. Trust us, we know. In fact, if you listen carefully, you can hear Tall Matt’s knees knocking together because he knows it’s his turn to take the field with them. The ladies are perennially playing for the National Championship and have multiple players repping the USA in international play. Meanwhile, the men are playing exceptional rugby right now and knocked off Super League power house and arch rival Old Blue for the first time in 16 years on Saturday. Their post-victory photo is at the top.

They also have an Under 19 squad…

And set up a league for KIDS, which is a blast to watch.

Now that you are completely Rugby’d out, allow us to hammer you further with this brief history of Ward’s Island, since Angry Ward writes tomorrow: Jaspar Ward and Bartholomew Ward claimed the island after the Revolutionary War and used it as a cotton mill. They also built the first bridge across the East River, connecting Manhattan at 114th Street. When the bridge got destroyed, the island got creepy. Check out what it was used for:

The State Emigrant Refuge, a hospital for sick and destitute immigrants, opened in 1847, the biggest hospital complex in the world during the 1850s.The New York City Asylum for the Insane, opened around 1863.

P.s… You can read Ed Brydon’s recap of the match here.