FLUSHING MEADOWS, NY – Marat Safin opened the U.S. Open by closing out his career. He had a pretty solid 12 years on the tour, winning 2 Grand Slams; all jump-started with a thrilling Open upset of Pete Sampras 9 years ago. (Lucky b@st@rd Sampras’ wife is pictured above). Anyway, Safin had a nice run but was it significant enough for us to write about??? HAIL NO!!! Sorry, Marat. What caught our eye while skimming the aforementioned story was actually the mention of Safin’s sis, Dinara Safina – the number one female player in the world – and it wasn’t because they are the only sis/bro combo in Tennis History to both hold the number one ranking. Nope. Instead, attention was temporarily taken from Flight Of The Concords after taking a gander at some of Sis Safina’s pix. That birthed a somewhat shocking revelation:

“Tennis, including our prized U.S. Open, seems anything but exempt from the funny business that taints our other professional sports.”

Ladies and Gentleman, we have never been accused of being Rocket Scientists. We have never made the Harvard Law Review or been privy to the Skull & Bones handshake. Moreover, we are yet to be approached for potential MENSA membership. Yet every once and a while, we separate from the Short Bus People and actually come up with a point, raise an argument or highlight an ignored issue. This is a case of the latter. That said, please consider the following photos of: 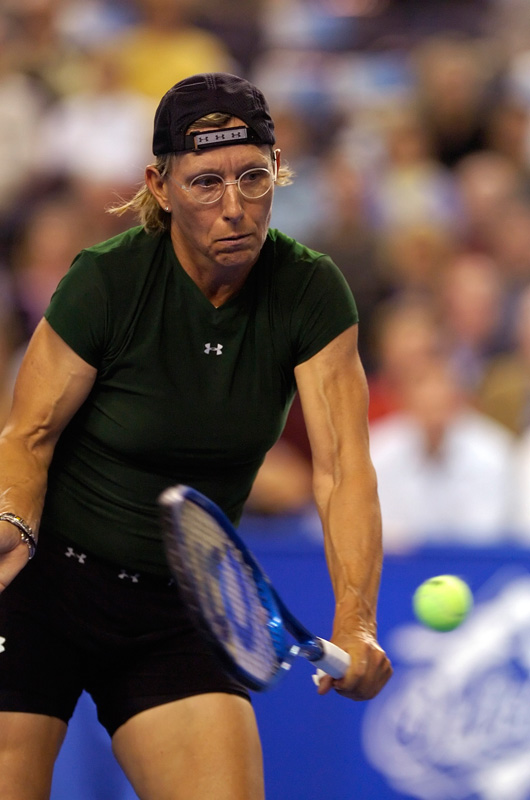 What in Balco’s name is going on here, anyway? Lt. Columbo wouldn’t need but two puffs on his quarter stogie to put this case to rest. We bet our back hair that these dames are/were dabbling in some serious body-altering concoctions. Otherwise, all that running at tennis practice and matches, aside from the other road work the pros do, would have them looking like Chris Evert, Gabriela Sabatini or Maria Sharparova, who competes against these artificial amazons with grace, athleticism and an abundance of goodies she found in the deep end of the gene pool. Indeed, M-Sharp (MTM trademark) represents what professional athletes are supposed to be – NATURALLY GIFTED. Hold on to your hat, Sam’s-A-Fan – we’re not suggesting that Martina Serena Safina was devoid of nature’s blessings. To that end, we are releasing the following statement:

“We [The Matts] are simply and plainly saying that it sure as HAIL looks like those [natural] blessings were noticeably enhanced.”

Our closing argument is short and sweet. All we ask is that you compare the photos in this post and draw your own conclusion. Before you do so, however, we’ll leave you with the following snapshot of two other gifted, natural and successful athletes; two women that young girls everywhere can look up to – like Sharparova. Kerri Walsh and Misty May consistently play their sport at the highest level, which earns them the most prestigious, albeit out-of-place, fans:

Now juxtapose that image with this one, taken of the greatest female tennis player of all time.

Still not convinced??? Watch this:

DISCONCERTING NOTE: Our search for Navratilova photos had this in the mix: