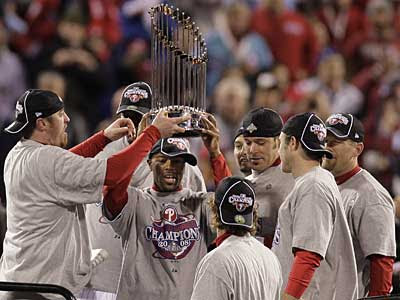 by The Philly Phanatic & Philview

In the May edition of Playboy, Jimmy “Prognosticator” Rollins responded with the following when asked to give his prediction for the 2009 World Series:

“The Fall Classic? I see our boys vs. the Yankees. They spent all that money. They’ve got to be there. We’ve got a title to defend, so we’re going to be there.”

Well, Jimmy was right once again. The Yankees are the team the Phillies must beat to repeat. The Bronx Bombers finished with baseball’s best record in the regular season and have steamrolled through the minor league postseason, just as many predicted. Now the Yankees will meet the World Bleepin Champions in the World Series.

However, the time for talk is over. On Wednesday night, the most significant seven game series in the history of baseball begins. The Team of Last Century vs. The Team of This Century. The Evil Empire, which has spent more than One Billion Dollars since their last World Series appearance, vs. a team that has been built by drafting players and using them on the field or in trades. In fact, we were lucky enough to obtain a copy of George and Hank Steinbrenner at their organizational meetings in the fall of 2003:

More than pride is at stake. It’s “How U’ Doin?” vs. “Yo!” It’s cheesecakes vs. cheese steaks. It’s Broadway vs. Broad Street. It’s the Statue of Liberty (even though it is in NJ) vs. the Liberty Bell. itâ€™s Joltin Joe vs. Smokin Joe. Itâ€™s Independence Hall, the symbol of freedom and re-birth vs. Wall Street, the symbol of greed and a collapsing economy. Itâ€™s a Met fan’s (please click this link) most hated opponent vs. well, letâ€™s see, the other most hated opponent. Donâ€™t worry Met fans, Omar will get you back to one of these one day. Speaking of the Mets, that’s one thing that the Phillies fans and Yankee fans have in common. We really don’t care what you think because you’re really not competition for either of us.

Back to the World Series: This epic battle reminds me of another battle fought in October 1980. When the Greatest Champion of All-Time came back for another shot at the title against an upstart from Pennsylvania. The current one will end the same way it did for that once-great champion; sadly for Yankee fans. I can hear the Fox announcers now: â€œâ€¦this must be stopped, heâ€™s ready to go, itâ€™s a sad way to endâ€¦â€