Bristol, Connecticut â€“ I rant and rave a great deal every Sunday, channeling a poor manâ€™s Phil Mushnick. Every now and then, though, continued excellence must be recognized, especially in the 24 hour news cycle, sound bite world we now find ourselves. In an age when selling out is the rule and not the exception, when Derek Jeter wins SIâ€™s Sportsman of the Year based to some extent on the fact that he runs hard to first base when 80 percent of major Leaguers donâ€™t, itâ€™s time to recognize the Walter Cronkite of sports journalism, ESPNâ€™s Bob Ley.

The bar for almost everything associated with playing and reporting on sports has been lowered again this week by Tiger Woods. About an hour from now, though, a big time athlete will get a DWI, drug suspension, or assault charge and we will move on to the next scandal. 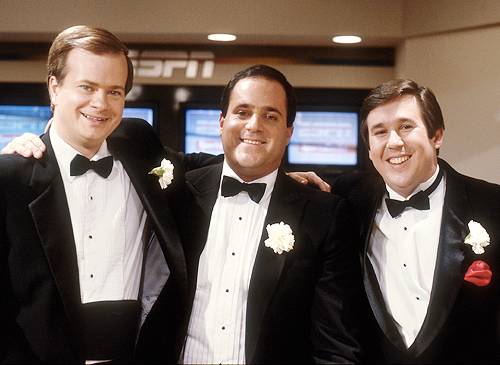 Through it all, through the last thirty sordid years of self promotion, greed, hypocrisy, natural disaster, crime, and shame, Bob Ley has been the only member of the ESPN family to remain unsoiled by ego, buffoonery, or disloyalty. He, Chris Berman, and the late Tom Mees began with the greatest of intentions back in 1979.

In college, my electronics whiz roommate, figured out if you pressed F and 9 at the same time on our illegal push button cable box, you could get ESPN, and the world of Aussie Rules Football and Lumberjacking was ours. ESPN was The Little Engine That Could. They would air ANYTHING!

As the years went by, ESPN swallowed up everything in its path, much like the planet killer Jim Kirk fought in the original Star Trek.

Tom Mees died and Chris Berman, though a pro and very entertaining, became a caricature of himself. Through it all Bob Ley reported on the Earthquake Series, did the only Sportscenter on 9/11, and as recently as Friday effortlessly anchored The FIFA World Cup draw. He developed his Outside the Lines series to tackle real sports issues. Everything from Title 9, to head injuries, to sneaker scandals, to local sports stories was and is covered with preparedness, fairness, and professionalism, garnering Ley several Emmy and Ace awards.

So, in yet another sports week that makes us cringe, letâ€™s toast a true professional, the anti-sellout, sports journalist Bob Ley. Happy Holidays, thanks, and keep up the good work.