BALCO Studios – It’s been a strange week in baseball. Two household names got suspended for using performance enhancing drugs. The Red Sox put two of their biggest names on waivers. And Joba drilled Youkilis again.
The Melk Man knew he had to perform in his contract year so he decided to cheat. Milk does a body good, but testosterone does a body better. And he would have gotten away with it too if it weren’t for those meddling testing agencies. Melky now has to sit out fifty games but still can win the batting title if McCutchen falls off this September. If that happens, Baseball will have officially lost all credibility as a competitive sport and will be reduced to the level Lucha Libre, but less entertaining. Actually I think baseball players should wear luchador masks and capes as part of the uniform. That would make things much more fun. 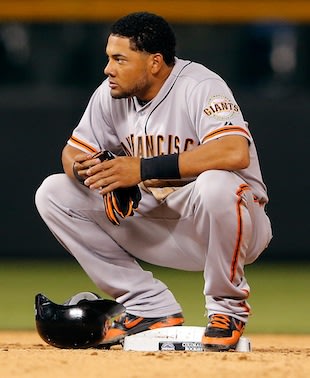 Bartolo Colon also got caught cheating and is now on the shelf for 50 games. I can see how he could accidentally take synthetic testosterone during a late night binge and pantry raid. He was probably just shoveling everything he could find into his mouth. It was inevitable that he would scarf down a pallet or two of testosterone supplements. Hopefully that’s the last we’ll see of Colon in the majors. He’s almost 40, which if we apply the Dominican Ballplayer Age Correction Factor means he’s actually 48.  Not many teams would be willing to sign an old pitcher who needs performance enhancing drugs to pitch decently. Will the next player to get caught also ply his trade in the Bay Area? Only time will tell, but the smart money says yes. It must be something in the water.

Up in Boston, the Red Sox placed Josh Beckett and Adrian Gonzalez on waivers. I doubt anyone will claim either player. The two are owed a combined elevendy bagillion dollars. Even if either player is claimed, there’s no guarantee that a deal will get done. Beckett can veto any trade and Gonzalez makes waaay too much money. Former Red Sox poster child Kevin Youkilis got drilled by Joba Chambarlain again. And again he did nothing. This was Youk’s chance to get all Lucha Libre on Joba. It’s happened too many times now for it to be a Joba control issue. Chamberlain clearly throws at Youkilis every chance he gets. Youk could have charged the mound setting off a battle royale at Komisky-er “US Cellular” Park. Instead Youkilis just took his base without any fuss. It was probably for the best as the ChiSox swept the Yankees.

The Yankees’ double-digit lead in the AL East has dwindled to just 2.5 games. The Yankees still have some injury concerns, while the Rays’ rotation goes from strength to strength. It will be a very interesting run-in to the postseason with the extra wild card adding importance to winning the division.