BALTIMORE, MD â€“ The only way Tall Matt and die-hard Yankee fan Mrs. Matt could afford to see the Bronx Bombers in 2009 was to sojourn to another American League city and get reasonably priced tickets. Immediately off the list was any city that necessitated plane travel because that would defeat the cost savings objective; weâ€™re dumb but weâ€™re not stupid.

The Yankees do play an interleague series against the Nationals in DC and of course one with the Mets at CitiField but those games are in June and Mrs. Matt was too hyped and couldnâ€™t wait. That left us with the short list of Boston or Baltimore. The Red Sox ticket is perhaps the hardest in baseball to procure and Mrs. Matt refused to contribute to Red Sox Nation. Thus, we headed to Charm City; the home of the Orioles.

The city of Baltimore has evolved into a waterfront winner in recent years, something the Orioles havenâ€™t managed to mirror. A decade+ long malaise has allowed this place to become Yankee Stadium South and that is no exaggeration. We are talking about the largest invasion of Yanks south of the Mason-Dixie line since the Battle of Antietam. The streets, hotels, restaurants, bars, museums and even boats were awash in white with blue pinstripes. You almost feel bad for the poor city. They renovate their downtown and waterfront to perfection only to see the blister fleshed Visigoths invade all summer long. What the heck, though, weâ€™re certain revenue is appreciated. On Friday night, A-Roid made a first-pitch triumphant return to the line up with a 3-run first inning blast, all the runs High Cheddar Cheese Sabathia needed in a complete game shut out.

We had tickets to the Saturday night game, so our journey started late-morning in New York. On the way we decided stopping for Maryland crabs and beers was a MUST. Not crab cakes, not crab soup but real Maryland crabs; the Old Bay smothered ones. The wait for the crabs to get to our table at Bo Brooks was tiresome but placated with Fordham lagers, Backfin Pale Ales and Blue Moons. We gobbled up onion rings the size of bagels. Mrs. Matt opened the festivities with

â€œThe Angry Mallet â€“ the strongest drink on Boston Street! Drink a few of these and the crab might not be the only thing getting whacked!â€

Our little guy, Tommy, was served a frozen corn dog which was embarrassingly replaced with a microwaved but burned and shriveled corn dog. Poor kid.

When the 50 crabs for 3 adults finally showed, frenzy – the likes of chum-filled shark waters – began. Despite our appetites, we didnâ€™t finish and they packed the uneaten crustaceans for us, which we promptly/wisely gave to our hotelâ€™s bellmen. (This summary is known as the jgclancy Food Recap, by the way. Ole Jim!)

A blustery, warm and drizzly night welcomed the mile and Â½ push of Mrs. Mattâ€™s wheelchair (yes weâ€™re still using it for great baseball seats). We strolled/rolled on the charming little walkways over canals and past majestic tall ships toward Camden Yards. Like a message from the Almighty, the rain hit us for 60 seconds and subsided as we made our way inside.

Oriole Park was the first of the â€œretroâ€ parks to open (in 1992) and in our opinion not only was the bar set high, it has never been topped. We came in through the Eutaw Street entrance. This one time street is now an agora of activity at the ballpark between the seating areas and the old Baltimore and Ohio warehouse. It is a place where fans hang out, have cocktails, eat BBQ and see plaques of great Oriole Hall of Famers. Itâ€™s a perfect place to shop, enjoy the sights and sounds of the ballpark and hang with other fans. From Eutaw Street the fans also see the sea of green seats in the main grandstand and the beautiful sunken field.

During the game, which became secondary of course, we wandered all over the facility to look at views, sight lines and amenities. The Club Level is an excellent mix of suites, seats, bars and concessions and looks brand spanking new. (Speaking of brand spanking new, we couldnâ€™t help but wonder how they keep the toilets so spic â€“n- span. The johns at CitiField are already nastier.) The Upper Deck, Club Level or Field Level seats are all oriented properly and the sightlines are nearly perfect. There are a few seats in right field were there is some obstruction of the right field corner but the inconvienence seemed minimal. The two major differences between Oriole Park at Camden Yards and Citifield are a lack of foul territory at the latter and more recessed seating at the former. Citifieldâ€™s seats do bring you closer to the action by stacking the decks as close to the field as possible but at an awful sightline price. Though the seats were further back at Camden Yards, you certainly felt like you were on top of the action. 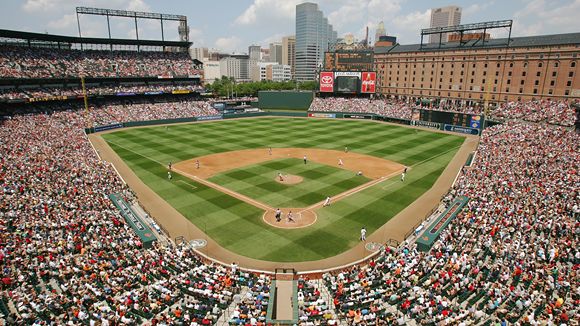 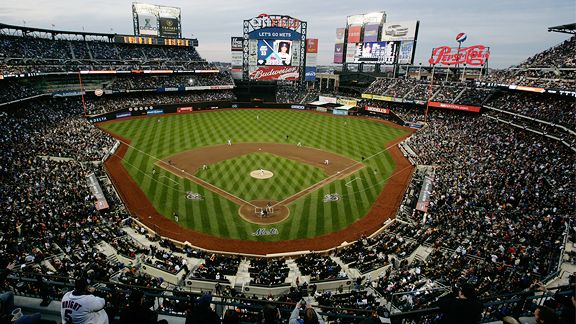 So, if you donâ€™t mind Baltimore, can we swap stadiums with you?

Oh, and since the Yanks got massacred in the night game, weâ€™re changing the Civil War analogy to the Battle of Sharpsburg, as the South likes calling Antietam.