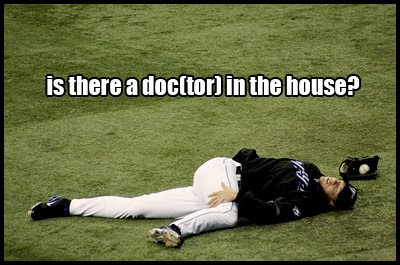 Details of this trade are sketchy right now. In fact, we caught wind of it accidentally, overhearing a conversation at SNY headquarters. Regardless, it is big news.

What is most shocking about this deal, aside from its adding even more intrigue to the aura emanating from NY Met General Manger, Omar Minaya, is that it reduces the negativity swirling about Minaya – and his perceived precarious tenure – to nil. Further, the enigmatic Minaya basically robbed Toronto General Manager J.P. Ricciardi, getting the most coveted pitcher in baseball for an injury-plagued John Maine, outfield prospect Fernando Martinez, free-agent-to-be Billy Wagner (with $8,000,000.00 for the 2010 option in his contract) and Livan Hernandez, who apparently like hubcaps.

Reportedly, Omar was heard on his cell phone outside Mickey Mantles Restaurant explaining the deal:

“This is one of those, you know, deals that will help both clubs.” –

This was just moments before Blue Jay GM J.P. Ricciardi had the following statement on a Canadian web blog cast:

“When [Ruben] Amaro called and said they got Cliff [Lee], eh, I called Omar immediately. Sure, he’ll take some heat for this, eh, but in the long run, Santana and Roy [Halladay] make as good a one-two punch as there is.”

Critics of the transaction point to the fact that while the Blue Jays can use aforementioned Mets immediately, New York must wait for Halladay. This is what Minaya had to see about the controversial terms of the pact:

“We’re talking Halladay, okay? You know what I’m sayin’? He’s, you know, good. Sure, I know we gave up a lot right now but, you know, he’s a top pitcher. He did a great job with the Maple Leafs. When he gets here he will, you know, be good, okay? You know?”

What are those controversial terms? Well, apparently, Riccardi refused to make the swap unless Omar let the Jays keep Halladay for the rest of his current contract, which expires at the end of the 2011 season.

“I just threw that out there and Omar grabbed it. We get Wagner for free next year. Sometimes you can’t say no, eh?”

We also heard Minaya say the following in what we believe was a different call – one to Met owner Fred Wilpon:

We’ll be listening closely for more, checking in with our man at SNY, Sidd Finch.