Turnberry Castle, the birthplace of Scottish King Robert Bruce – where the 2009 British Open is being played.

TURNBERRY, SCOTLANDâ€“ Look folks, I could have written today about the Mets and Johanâ€™s solid start or the Yankees taking the first two from the Bengals, or even Lanceâ€™s stalking the field in the Tour, but the story is Tom Watson at the British Open, plain and simple. 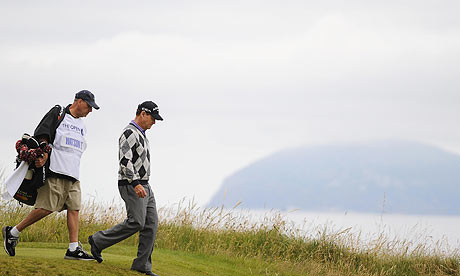 Let me tell you why this guy, more than any other old guy, can get this done:

Heâ€™ll be 13 years older than any other major champ and if he hasnâ€™t blown up by now, he might not at all. Jack Nicklaus at Augusta in â€™86, in another thrill ride, is the oldest until someone unseats him:

Goosen is a guy that could crash the party, or even Furyk or Westwood, but make no mistake, Tom Watson is the story, the favorite, the sentimental favorite, and the favorite son. This is great theatre and you donâ€™t have to like or even appreciate golf to be pulling for one of the classiest guys in the gameâ€™s history who just happens to be 2 months from his 60th birthday. Watson was supposed to be helping out in the booth after playing two ceremonial rounds of 75, taking a shower and grabbing a microphone; instead he just might do the unthinkable. No oneâ€™s going to hand it to him and the odds are definitely against him, but this reporter thinks heâ€™s got a 50-50 chance.

The beauty of the British Open (I still call it the British not the Open Championship) TV wise, is you can watch the final round and still have the rest of your day free. GO TOM! Walter Cronkite and a CBS Camera crew use a jeep for a dolly during an interview with the commanding officer of the 1st Battalion, 1st Marines, during the Battle of Hue City. 02/20/1968