WASHINGTON, D.C. – Today, live on free TV, for every woman, child and man to see, there will be a woman swearing – and nobody is going to stop it! In fact, a Native American, one that earned the most esteemed name Chief Justice, will not only be condoning this lurid behavior – he will be encouraging it! That’s right, the man that we pay to be the Chief of Chiefs, to tell us what’s right and wrong and just, will ordering a lady to swear on TV today – and we think it’s disgraceful. In fact, if we weren’t busy packing for our trip to Australia this morning (we leave tomorrow night from JFK and arrive sometime next month in Melbourne), we’d head down to our nation’s capital/capitol with a switch and a bar of soap.

Suffice to say, these FOUL MOUTHS are lucky we have a pool party to go to in New Joisey! Otherwise, we’d be right there – washing their filthy tongues with soap and snapping that switch like two pent-up school marms! Maybe this “Chief Justice” needs a good, stern talking to. Maybe he needs a slap across his insolent face. How could he forget his manners and upbringing and get to be Chief? Did his memory fail him once he was “sworn” in???

All is not lost, Mattville, for there is someone out there, someone we know personally, that would be a proper Chief of Justice; someone who speaks the truth because he fears no repercussion… Nor does he fear any man. Who is this brave warrior that we would have as our decider of what’s just? It’s our boy Forrest Griffin, the former UFC light heavyweight champion who is fighting Anderson Silva, often touted as the best pound-for-pound fighter in the world, in the UFC 101 Title Fight, today in Philthydelphia. 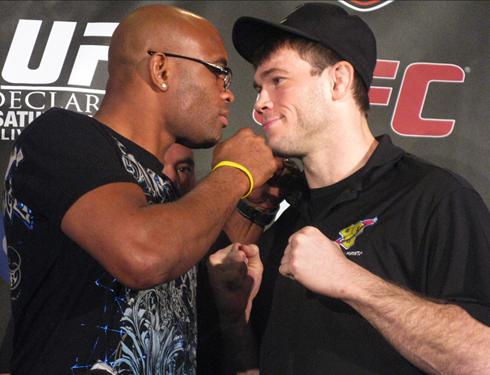 “The reason I’ve won most of my fights is that I’m too stupid to back down,” Griffin writes in Got Fight?: The 50 Zen Principles of Hand-to-Face Combat, the best-seller co-written with Erich Krauss.

When you meet Forrest, you meet a soft spoken, mannerly soul who you’d see helping an old lady across the street. He’s about 6’2″, looks ‘country strong’ and usually has a scratch or two on his face. We had the pleasure of meeting Forrest during one of his creative endeavors, one that we just happened to be a part of. Here it is:

Between takes, Forrest was asking us how we did it, how we were able to remain calm when “Action!” was called. He was as humble and unassuming a person we’ve been fortunate enough to meet, yet he could take 99.9% of the population’s head off in about 30 seconds. We giggled a bit, asked how he remained calm when he stepped into a steel cage with angry human gorillas and 30,000 blood thirsty fans yelling/hoping to see someone relegated to the short bus for the remaining years. (We’re paraphrasing, of course.) He laughed and said he never thought of it that way. This week, he had this to say:

“I know if I bring the game that I’m capable of to the fight, it’ll be a good fight, and people will be excited about that. So no worries.”

Gosh, don’t you just love this guy! Oh, and this is his other side:

Hopefully, Carlos Beltran, Jose Reyes and Carlos Delgado were taking notes on the above…