by Philview and Philly Phanatic

PHILADELPHIA, PA – This past Sunday several teams, including the Mets and the Phillies, participated in what we used to call doubleheaders. Things are different now, of course, because in these doubleheaders, the fatted calves from the first game are not allowed to stay. After the last out, they’re cattle-driven to the parking lot, to either graze or go home. The true “doubleheader,” as we knew it, has gone the way of the two dollar beer. And the five dollar beer for that matter.

As this season winds town, these games, obviously, hold little significance for most of the other teams. They are simply contractually bound to play them. Locally, injuries and leadership crippled the Mets long ago and buried the season. They join the masses with a winter of wondering and discussion ahead. Specifically, the Mets must wonder if the window already closed on this team. Maybe, maybe not. On the bright side, there will be no September collapse this year.

Meanwhile, the Phillies are leading the NL East and headed for the playoffs. They go there, by all accounts, a leaky faucet; a team with a few steady parts but more puzzling questions than an MCAT. Somehow they have a huge lead – oddly enough, very close to what the Mets enjoyed two years ago. There will be no historic collapse, however – this team is good enough and the teams behind them are not. But there are holes.

Back to Sunday: On a wonderful, clear, comfortable night in Philadelphia, the stage for game two was meticulously set. The Mets had come back from the dead the day before – on two home runs by slugger David Wright (bringing his post-steroid season total to 10). The Phillies had won earlier in the day behind Kyle Kendrick, who spent most of the season in the minors trying to learn a third pitch. Despite a three run lead in the ninth, the first game was almost lost by Brad Lidge, again. The Marlins had lost.

So, as we (the Phanatic and Philview) entered the stadium around 6:30pm on Sunday, we assumed we were in for a nice relaxing evening. Quickly, however, from the first pitch, it was evident that for this one night, the standings would mean nothing. Pedro was pitching. It was the Mets. Nothing else mattered.

The tension, the tightness, was there from the outset. It was as if the teams were playing, right then and there, for the division itself. The crackling of rivalry – missing all year and so desperately needed – came roaring back for one evening. And until the last out, the game’s outcome was impossible to predict!

It was, from end to end, a glorification of the beauty of baseball. Today, still awash, we wanted to share with you a few of our expert insights, events and observations from the game: 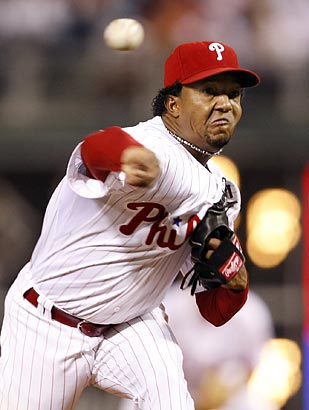 The game ends on a line drive, with the tying run on second. Once again, hardly a dominant performance by the Philsâ€™ closer of the night – but at least it’s over.

For the Mets, not even Matts-Matics can save them now as the Phillies officially eliminate the injury-proners from any post-season chance this year. They are now just like the Pirates. Nothing will beat that historic collapse of 2007, but it was sweet to see the Mets season finally crumble in person.

Angry Ward should be good and angry tomorrow.