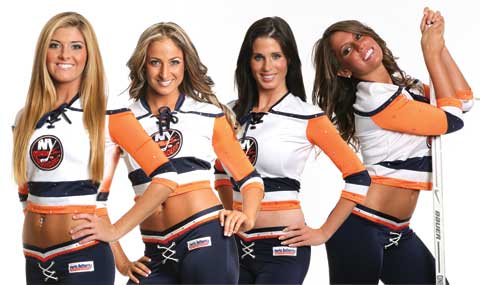 HOKIE – I know itâ€™s patently uncool to be a New York Islanders fan. I know theyâ€™ll be toiling in Yellowknife or Kansas City or Moosejaw someday; yet having attended Tuesdayâ€™s thorough 6-0 dismantling of the Detroit Red Wings, the home squad controlling every facet of the game, I detected a ray of light, an iota of hope. With Saturdayâ€™s win over Buffalo (a shoot-out victory for oft-injured Rick DiPietro) the Isles have gone 8-2-1 in their last eleven and have the league asking themselves, â€œWho ARE these guys?â€ Young guns Josh Bailey and Kyle Okposo, along with rookie John Tavares are contributing on a very young, hungry squad. Grizzled vets Doug Weight and Andy Sutton are providing guidance to a team that could make a run at the playoffs.

But that’s not why I’m dedicating space to hockey this week.

Hockey is gloriously hokie! Tuesdayâ€™s Islanders promos included stunts that would make Jackie Moon proud. T-shirt guns and Kiss-Cams are probably not so old hat; but most of the goofiness (like Ice Girls)probably started with The Montreal Maroons or The Guelph Dominators, back in the day. Baby races and Chuck-a-Puck were so Bill Veeckian I thought a Disco Demolition was going to ensue. When the Isles were up 5-0 (ticket holders having earned free Wendyâ€™s chili at 3-0) the crowd started chanting DOUBLE CHILIâ€¦ clap clapâ€¦clap clap clap! Add two octopi

thrown to the ice by Wings fans trying to hex the home team and itâ€™s Vaudeville on skates. I thought Uncle Miltie was going to skate out in a dress. So hereâ€™s to hokieâ€¦ erâ€¦ hockey; still goofy, unstuffy, and unashamed. What, no Dancing Bears?

HOKIE DOKIE â€“ How about that Mark McGwire? I knew when he became hitting coach for The Cards, something was going to have to give. I never, for one second, thought heâ€™d completely come clean (see Stoopid Skool 2/22/09, and The Trickle-Out Theory 2/15/09) and I was laughing my baseballs off when he said that steroids didnâ€™t help him hit home runs. They helped him recover, SO HE COULD HIT HOME RUNS TOMMOROW! Ugh!!!!! Whatâ€™s next, Barry Bonds hired as The Giants strength coach?

HOKIE POKIE â€“ Only in America can we turn serial philandering and scumbaggery into sex addiction. This just in from “The Rumor Has It Department“: Tiger is being treated for his errant drives, use of his long putter and pulling out his wood at a clinic for what has to be the most hilarious of our many made -p disorders. Let me see if I understand this: Eldrickâ€™s going to be in group therapy with a gaggle of sex-addicted hotties, discussing his most intimate blood engorged moments. Good. Great. Whatâ€™s next, open bars at AA meetings? Better keep those linen closets and hallway bathrooms locked!

HOKIE BROKIE â€“ The Washington Wizards (ironically, formerly The Bullets)are looking to use the morals clause in Gilbert Arenasâ€™ contract to take $111 million back from the gun-toting uber-scorer. Will he call Plaxico Burress for advice? Heâ€™ll be young enough to play in the NBA when he gets out of jail, so we havenâ€™t seen the last of him, but hopefully weâ€™ve seen the last of guns in the locker room. Nahâ€¦ who am I kidding?

P.S. I think we need a Meet The Matts writer’s summit in NYC in the very near future.