Those Feces-Flinging Jackanapes at ESPN. Berman, Keyshawn, Ditka, Mortensen, Schefter, Carter, Jackson, Young… the yammering idiots populating the set of NFL Countdown reads like a list of people I would never want to have dinner with.

The Sunday Blues. You know the scenario. Your favorite team loses, your fantasy team makes bubkes, and sometime around 9 pm, it starts to sink in: “I just wasted an entire day on my couch watching football.” Sure, you could have taken your kids to the park or treated your family to brunch or even spent one of those eight hours doing some yard work but no, you just had to witness every last second that three-touchdown blowout. You’ll be damned if you’re tuning into that meaningless Sunday night game. Wait… your kicker is playing? Ah, ok, three more hours won’t kill ya. 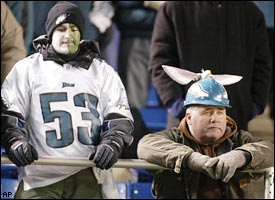 Philadelphia Eagles Fans. Just when you thought that Eagles fans couldn’t get any more insufferable, the team somehow manages to go out and sign just about every high-profile free agent available. Needless to say, the animals that root for the Eagles are already whipped up into a frenzy and planning to commit a whole host of new unspeakable acts upon visiting fans. The team’s 2011 slogan: HUMAN SACRIFICE IS NOT OUT OF THE QUESTION, is ominous to say the least. Memo to Michael Vick: When this bunch turns on you, and they will, you’re gonna wish that your dogs got to you first. You too Vince Young! Philly is no place to soothe jangled nerves.

Tony Romo. It’s not that I don’t like the guy. No, wait, that’s it exactly.

Jon Gruden and the MNF Crew. I can’t stand how every single Monday Night Football game, Gruden and company talk about what a terrific 15-minute meeting they had with some player the night before and what a “great young man he is.” As if you can judge anything about anyone in that amount of time. Gruden inevitably comes off sounding like Martin Short’s agent character in The Big Picture: “I don’t know you, I don’t know your work, but I think that you are a very, very talented young man, and I am never wrong about these things.”

Holiday Jewelry Commercials. By the time November rolls around, the NFL airwaves are chock full of ads telling guys to go to Jared and how every kiss begins with Kay. It would be laughable if it weren’t so annoying. Believe me, if I gave my wife a Jane Seymour Open Heart necklace, she’d open my heart and feed it to me.

Further Reviews. The NFL announced that it will now review every single scoring play. This means more bathroom breaks for everyone and a possible stroke for the Fox Football robot. So, potentially, this could be a good thing.

Somebody is back tomorrow – just not sure who since The Hacking.