“Our captain and leader has not left us, today, tomorrow, this year, next … Our endeavors will reflect our love and admiration for him.” 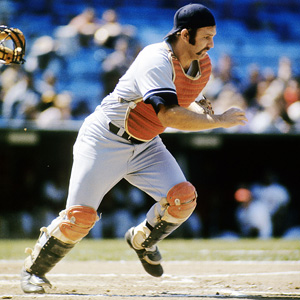 AKRON, OH – A day late here, but yesterday marked the thirtieth anniversary of a true remember-where-you-were-when-you-heard moment, perhaps the first of my life (for twelve-year-old me, I was visiting family on Long Island, waiting in a hot car while my Aunt went into a Waldbaums for some quick groceries on the way home, and I heard the news on the radio): Thurman Munson died in a plane crash.

Iâ€™ll let others wax on about Munsonâ€™s careerâ€”like former Yanks PR guy Marty Appel, who has a new book about him (Munson: The Life and Death of a Yankee Captain) thatâ€™s supposed to be pretty spellbindingâ€”and itâ€™d be easy enough to look up his statsâ€¦ Okay, here are the key ones:

He was also the classic â€œeveryman,â€ the kind of guy fans naturally love, a guy who played hard all the time, who loved to get dirty, who looked like a guy you could be working next to in a factory all day and then having burgers and beers with afterward. He could also be prickly, particularly with the press, and even more notoriously with Reggie, and openly lobbied to be traded from the Yankees to the Indians so he could be closer to his family, the â€œreal worldâ€ as he would say, as opposed to the â€œfantasy worldâ€ of baseball. Dying in Pinstripes, however, makes sure heâ€™s remembered a Yankee foreverâ€¦and fondly so. His locker still sits empty next to the current Captainâ€™s.

Maybe because I was so young, but Munson was one of those guys who looked like an old guyâ€¦the years behind the plate, the scruffy hair and that thoroughly kick-ass side burns/Fu Manchu combination, the not-exactly-svelte physique that had him referred to as â€œSquattyâ€ (he was also called â€œGrumpy,â€ and Bob Lemon called him â€œMeatâ€). Itâ€™s almost inconceivable that he was only 32 when, almost as an afterthought, he decided to go for a few touch-and-goes in his new Cessna that tragic day. So often are legends based on a sense of romance around people who died too youngâ€”like James Dean in that car crash, or Randy Rhodes in his plane crash, or Michael Jackson in that tragic Pepsi commercial fireâ€”but Munson could one of the worthwhile ones. If for nothing else, nothing quite epitomized those awesome Yankee-Red Sox games of that eraâ€”when the two teams truly despised each otherâ€”as the battle between the two backstops who also didnâ€™t like each other at all, Munson and Carlton Fisk. (And what better to remember in light of next weekend’s big showdown?)

Now this is supposed to be a comedy site as well as a sports one, and Iâ€™m not sure how anything about Munson is funny (thanks to Cookie for suggesting writing about all the people who probably shouldnâ€™t have decided to get pilotsâ€™ licensesâ€¦but Iâ€™m afraid John Denverâ€™s and John Johnâ€™s passings still cut too deep for me). Appel had previously helped Munson write an autobiography in 1977, a book Appel himself claims to hate, as Munson didnâ€™t really want to share anything interestingly personalâ€”like his being raised by an abusive, dead beat fatherâ€”and instead just wanted page after page of stats. When he first showed a draft to Munson, Munson asked if he could make it â€œfunnier.â€ Appel said sure, â€œgive me more funny stories.â€ There arenâ€™t many. I tried looking for some on the interwebs, and the best I could find involved Munson telling Ron Guidry, after he walked the bases loaded, to strike out the side or Munson would break both his legs (was he joking? Guidry didnâ€™t want to find out, and indeed kâ€™d the side). I looked up Munson stories in Roger Kahnâ€™s October Men, but didnâ€™t get much beyond the â€œGrumpyâ€ Munson cursing out businessmen on plane trips when they asked him to turn his country music down. So he was no Bob Uecker. He wasnâ€™t even Graig Nettlesâ€¦whose own book, Balls, I turned to in trying to find a good story about the Captain. Nothing as good as Sparky Lyle sitting nude in cakes, I thought this was pretty decent, even endearing:

â€œThurman loved junk food. He could eat a pizza at every meal. Or cheeseburgers. He loved cheeseburgers. (After Munsonâ€™s funeral) As we pulled around the corner from the cemetery, there was a string of junk food joints. â€˜Only Thurman would be buried next to a Burger King and a pizza parlor.â€™ We grinned. It was the perfect place for Thurman to be buried.â€

So while Munsonâ€™s story may not be chock full of funny, he was unquestionably a player worth remembering fondly; a guy who really cared about the game – a guy worthy of his â€œC.â€ In his tribute game, the one Bobby Murcer drove in all five runs of after choking up while eulogizing his great friend earlier, Howard Cosell waxes on and on with the melodrama, sounding particularly forced even for him, but Keith Jackson summed Munson up better and more succinctly in just three words,

(NOTE: The video is pretty long, but for the brief Munson part, forward to the 2:16 mark)