FORT WORTH, TEXAS -Itâ€™s that time of the year when college football starts to wind down. That means it’s time for the big boys that run the so-called Bowl Championship Series , which used to be called Division I, to utilize polls, conjecture and some questionable officiating to make sure that two schools picked from the “power conferences” will play for the championship. No playoff here; no simple tournament like every other sport on the planet. Nada. Nunca. Nope. No way.

The reasons for this are? Well, they are… um… kinda funny. One explanation that has been given is that a playoff system would add too many games to these poor little ol’ players schedules and cause them to wear out physically. Another is that it will negatively impact a player’s grades.

Yet, all the other divisions have multiple game playoffs. As do a lot of the larger states, like Texas, California and Florida, in high school. So, the-powers-that-be would have us believe that playoffs will negatively impact the academics and bodies of Division I players ONLY, but is okay – or at least has no negative impact– for all other players at levels both below and above them. Yeah, right. Sure. Want to buy a bridge? I got one in Brooklyn to sell you, real cheap.

The BCS is all about keeping the money for the big six conferences. The big games are worth $17.5million. Plain and simple. So this year, teams like TCU wonâ€™t be able to play for the championship and Boise State will get totally shafted by not getting a major bowl at all despite -get this – Despite an undefeated season!

That’s all. But we ain’t gettin’ ’em, even after blatant bullsp!t like last year’s Utah team going 13-0 and not getting a chance to play for the BCS title. That prompted a Congressional Subcommittee Hearing in which University of Nebraska Chancellor and BCS figurehead Harvey Perlman was asked what dem Utes couldâ€™ve done differently:

â€œThey could have played the schedule Nebraska did.â€

Perlman neglected to mention that this was after dem Utes went out and destroyed â€œpower conferenceâ€ Alabammie in the Sugar Bowl, which sure as hell made LSU fans happy. 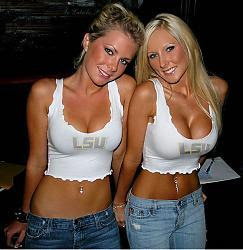 Boise State has an open date in 2011 and they are making a nearly unheard of offer in college football scheduling: They will go to any stadium in any town to play any big name team in America in 2011 and won’t make the accepting team reciprocate by coming to Idaho any time after that. Want to guess which team has an open date and is not returning the calls? Nebraska. Thatâ€™s right, The Corn-Wussies. That offer must have Mr. Perlman seeing red!

Boise St. knows it needs to play tougher teams. But how can they beat quality opponents if quality opponents wonâ€™t play them? Is this how the major conferences are going to deal with the Broncos and the other â€œnon-powerâ€ conferences: Keep emâ€™ down, let one team and one only, play in a major Bowl – if they are undefeated – and the heck with the rest?

There is something special that the current BCS contenders from the “power conferences” share, though, on that they crush the “non-majors” in: The proud programs from the Universities of Texas, Florida and Alabama are amongst the dumbest in NCAA Football. All three Universities are in the BOTTOM 10 in graduation rates. Weâ€™re talking bottom feeder here; guys who think that riding the short bus is standard operating procedure. These are guys who put the â€œreâ€ in remedial.

Perhaps the BCS feels sorry for these dumb-dumbs. But since the rest of us would like a playoff system – 32 teams, with 16 starter bowls – to establish a REAL NATIONAL CHAMP and to get rid of these crappy 6-6 mid-level â€œpower conferenceâ€ teams playing each other in bowls that nobody watches. But that would take getting past the Bullsh!t, Chickensh!t & Stupid.

P.s… Here are the college picks for today:
#4 TCU over dem utes from #14 Utah, as Lee Corso wears the Horny Toad head for the second time this year.
#8 O-HI-O ends #13 Eye-Wa’s dream of the roses.
#9 Pitt, playing like the days of Dorsett, beats those happy go lucky Irish.
The fightin’ cocks of South Carolina give #1 Florida a scare, but fall short… Showing that ya can beat those cocks.
#16 Houston, #6 Boise State and a resurgent Navy all have easy victors.
Can #25 Stanford do it twice in a row and upset #10 USC. Nope.
And #15 Okie State and Texas Tech get into a western shootout; the Red Raiders prevail.