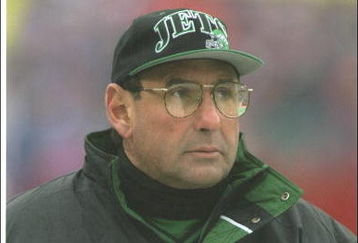 “I can deal with the despair, but it is the hope that kills me.”
I stole that pearl of wisdom from a good friend of mine. At the time we were discussing which rugby teams we liked and he confessed to following the Northampton Saints of the English Guinness Premiership League. Apparently all Saints fans in England, the United States or anywhere are long-suffering… Thus his quote.

I found this as a funny or odd quote at the time but left it at that. Then 2009 rolled around; a year in which I watched my beloved Mets end up on the Disabled List, my Knicks stink up their Garden and my Rangers struggle to score. But watching my Jets toy with my emotions has been the most painful. Yet, it all comes down to fan hood, and as painful as it has been, I think mine is in tact.

A short time ago, I read here about the Met fan that became a Yankee fan after the second consecutive collapse. I also read about a fan – maybe the same guy – that was happy the f#*ingYankees beat the Phillies. Let me this: For me, he is an impostor and was never a true fan. The pain and suffering is part of being a fan. When I meet Met fans I ask them real Met fan questions like: “Who were the Generation K guys?” Do you remember Anthony Young?  It is that pain of waiting for you team to get better that makes you a fan.

I have been in NY since 1985, when I was 6. In that time I have only seen 2 of my teams win: my Mets in ’86 and the Rangers in ’94. My Jets and Knicks have given me great moments like the 14-2 season that ended in the AFC Championship game and the John Starks in Game 6 in 1996 against the Rockets. I more vividly remember the heartbreak, though, because it is that pain that unites us all – Starks in Game 7 or The Rich Kotite Era.

We accept the losing; it is the hope that is the problem. It is when they look like world beaters and then they choke, or to put it more kindly – come up short. My Jets went into December last year 8-3, best in the AFC, almost a lock for the playoffs; the almost being the key. We all know what happened. It is that pain that disheartens; the way they make you believe you can start talking smack again to fans of any other team and then??? They fade like a Rex Ryan defensive scheme.

I still have visions of Beltran standing there just watching that pitch go by while I scream “SWING!!! Do something!!!” And no Knick fan could forget Charles Smith, a 6-10 guy, getting his lay-up blocked 4 times in a row. Dude, you are 6-10… Go for the dunk!

I remember my Rangers getting Gretzky and thinking we had reunited the Dynamic Duo and we would be set, but sure enough the struggled to make playoffs and never got out the first round. It is just when they give you that hope – the whole sch-bang – and then bam! A punch to the gut and a kick to the teeth. After that you are left wondering what happened. And how did this happen? It happened because you are a _________ fan and this is your eternal punishment.

We my friends, are Sisyphus. Sisyphus was the man in Hades who had to push a boulder up a hill and just when he would get to the top of the hill, the boulder would find a way to roll all the way back to down into his Hell. He would then have to start over. Sisyphus probably invented the “Wait’ll next year!” mantra that we all cling to.

So, I will cheer on my Jets this year and every year I have left on Earth. If they never win I have no qualms about supporting them because they are my team. I tell you one thing though; if they win when I’m gone, someone better do like those Sox fans a few years back and place a beer and a Jet hat on my grave.