Surprise City – We are more than a quarter of the way through the NHL season and the Rangers definitely do not suck. Going into this season, I thought the Blueshirts would be fighting for the wooden spoon in the East. Instead they are in second place in the Atlantic Division with a few games in hand over the first place Pittsburgh Penguins. On the other side of the coin, the New York Giants have stunk up the joint the past few games. And the Jets can’t decide whether or not they want to make the playoffs. Both local football teams have very little room for error left in their respective playoff pushes.

When the Rangers added Brad Richards to the squad this past offseason, I figured it would be another big money bust. The move seemed like a good one, but the Rangers’ track record over the past couple of years left me less than optimistic. But so far Richards has been in fine form with 20 points in 22 games. And Marian “Mr Glass” Gaborik has been healthy and productive with 12 goals on the season. With Lundqvist being Lundqvist in net, the Rangers are looking sharp. Still a long way to go this season, but Rangers fans can at least be optimistic about the direction of the Blueshirts. 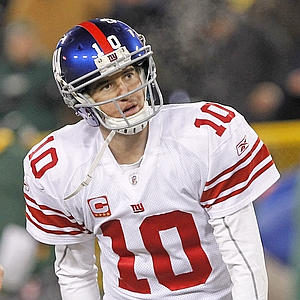 For Giants fans, the sky is officially falling. After going 6-2 in the first half of the season, Big Blue has lost three straight. The nadir of this stretch being a prime-time, nationally televised, Monday Night Beatdown at the hands of the Saints this past week. The defense that has been the lynchpin of all successful Giants teams decided to take Monday night off. A concussed Short Matt could have rushed for 100 yards, and Junior Blaber could have thrown for three touchdowns against the Giants on Monday. The Giants weren’t supposed to be any good this season. Then they played well for a few weeks and now they’re back to sucking. After the G-men lose to Green Bay this weekend, they will pretty much have to win their last four games to make the playoffs. Two of those games are against a resurgent Cowboys team, and one game is against the Jets, who will probably need the win to get into the postseason also.

The Jets stopped their rot last weekend with a hard fought, if unconvincing win over the rudderless Buffalo Bills. The Sanchise improved his TD/INT ratio a bit, throwing for four touchdowns and only one interception on Sunday. The Jets came into the season expected to go deep into the playoffs. Now they’re fighting to even make the playoffs. Of Gang Green’s remaining games, they have three against NFC East teams and they end the season with a grudge match in Miami. My guess is that the Jets will lose two very winnable games and miss out on the playoffs. And Sanchez will go back to his offseason hobby of banging high schoolers.

Don’t expect to be watching much local football come January, folks. It ain’t looking good for the Giants or Jets. On the bright side, the Rangers are good and Tall Matt’s Islanders still suck. And its looking like NBA fans will have something to watch this season after all. I could care less about that, though.

Thats it for me today. Buy some beer, wine, and airline tickets and tune in for The Public Professor tomorrow.