Rolling In It– Last week I offered four picks for the NFL Conference Championship games.  In response, our very own Lori Levine made a wonderfully strange offer: if I nailed them all, I could watch her pee. I hit three-out-of-four.So close. So close, but yet so far. Sigh . . .

So while I might not get the pleasure of pursuing a kink I didn’t even know I had (I’ve already got a lot, but for the record, I’ll add any Lori or Cookie tell me to), I can still take pride in a solid week. I’m on a roll, so let’s get on to the Super Bowl picks.

Terry Bradshaw and Roger Staubach also had a Super Bowl rematch a few years after their first go around. Both games (X and XII) were barn-burners, and Good defeated Evil each time. Now Eli Manning and Tom Brady are renewing their grudge match. Will the forces of Good continue to stand tall in the face of pure evil?

There’s certainly an element of déjâ-vu beyond the familiar quarterbacks. On defense, the Giants can still generate an impressive pass rush with their front-four. And New England’s offense is still a Tom Brady-led juggernaut that passes first and needs to be sneaky in order to run the ball with any effectiveness.

But there are also some important differences that lean the Giants’ way. First, Manning is a better quarterback than he was four years ago. Admittedly, New York’s running game is far worse than it used to be, but that still balances out to a higher scoring offense overall. Meanwhile the Pats’ defense is a mess, ranked 31st in yardage allowed.

Sidenote: MTM readers, pipe in with comments if you can think of a past Super Bowl favorite with a worse defense than New England’s current squad.

So where does this leave us then? None of this is easy. For starters, I like the Over, but playoff games generally, and the Super Bowl in particular, is notorious for having O/U numbers that are a good bit higher than they would be during a regular season match up. For example, these two teams combined to score only 44 points just three months ago, yet for this game it’s 55.

Why is the Super Bowl O/U number always bigger than it should be? Because the game brings out casual bettors. You see, the Super Bowl is to gambling what St. Paddy’s Day and New Year’s Eve are to drinking: amateur hour. And just as casual drinkers mistakenly believe that sweet libations make for a great time, casual bettors mistakenly believe touchdowns are easy to come by.

Betting the Under is a subtle wager that requires sophisticated analysis. But it’s easier for yay-yo’s to imagine a rash of touchdowns than it is for them to contemplate the role defense and special teams play in tempering the score. Amateur drinkers clog the bars in the name of St. Patrick, and casual bettor clog the betting parlors in the run up to the big game. The first group produces rivers of vomit, the second group a flood of Over tickets. The first group pushes up the price of a 7&7, the second group pushes up the O/U number up. 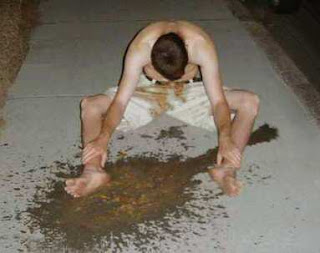 Nonetheless, I think if you’re gonna play this one, you’ve gotta lay the 55. The Giants might keep the Pats in check to some degree (and if they do, they’ll win). But I don’t see the Pats stopping the Giants all that much. This game probably won’t go over by a whole lot, but I do think it goes over.

While touchdowns should be a plenty, it’s that damn field goal I’m really worried about. Specifically, the  three points New England’s laying as the favorite.

Let’s be honest. Either team could win this game. As far as I’m concerned, it’s a 50-50 proposition. And so at a neutral site, this line should probably be a Pick `Em. It’s a very tough call. But when in doubt, take the points.

Plus, I really hate the friggin’ Patriots.

I also like Cheesy Bruin to post a top flight preview tomorrow. And remember kids: don’t bet the house, because none of us actually know what the hell’s going on.