MANNYWOOD, CA – It’s Friday and I’m all hepped up. Tonight my Yankees start the ALCS. I’ll likely be watching it at home since all I can find online is a $1,056 ticket. Sure, it’s Field Level, Section 17B, a wonderful seat. But unless Mark Teixiera is giving me a lap dance during the singing of Take Me Out to the Ballgame, I’m not buyin’. And yes, I’d make Mark wear a bag over his head.; his face is just WAY too goofy. But the baseball chemistry blinds me – I love him despite it.

That other epic battle between Cliff Lee (or was it Cole Hamels?) and his SHINY NEW BAG OF HAMMERS and the L.A. Manny’s kicked off last night. Good luck over there in LA. Between those two teams of the Crypts vs. the Bloods, I’m rooting for the Crypts. (Congrats Phillie on winning after Dodgers’ Kershaw does a fantastic imitation of Charlie Sheen’s ‘Wild Thing’ in Major League. Anyway, wake me up when we get to the final deciding game.)

Football? We’ll leave the picks to our resident expert, Rex O’ Rourke. We’ve got several teams at 5-0, so a few of those have to go down. It’s probable that my Broncos will lose to the 2-2 Chargers after beating The Brady Bunch last week. Meh. Oh well.

Since my enthusiasm remains with baseball these days – and you all don’t want to hear about that – I’ve got to turn my focus elsewhere to keep all of you in Mattville happy and entertained… I’ve got no idea what these glitter people are doing these days. All sense of sanity has gone out the window and (to paraphrase Thomas Dolby). People have been blinded by science. Pheromones surely play a large role in some of this stuff. The other stuff can only be explained by brain function that’s lacking, which is the H1N1 that’s been infecting Hollywood as of late:

A-Rod and Kate Hudson: She’s been seen at many a Yankee game. She’s dragged her celeb parents Goldie Hawn and Kurt Russell to games. She’s been playing mamma to A-Rod’s little girl and he’s playing Daddy to her none-too-enthused son, Ryder. Recent rag reports say they’re on the rocks; having been seen fighting at NYC’s Serafina’s. Feeling smothered, A-Rod said he ‘can’t do this anymore,’ that he ‘needs his life back.’ She sat and cried while he rolled his eyes and then threw down his napkin, leaving her in tears AND WITH THE CHECK! Other reports have them checking out new NY digs together, and her sitting at the Yankee games with the Yankee wives. (Apparently, this is NOT to A-Rod’s liking because it’s rather presumptuous. She SHOULD be sitting with the girlfriends.)

Whatever the case, I disagree with Larry King (as expressed in his turn on Grote’s Gripes a few weeks ago). She’s gross, and not in the good Grote2DMax way. She’s trumped Paris Hilton as the new, top Walking Petrie Dish. The only thing that makes me happy about this duo is it seemingly has no effect on A-Rod’s post-season play. Hip hip HO-ray. Maybe a little roll in the hay DOES prove to be good for on-field performance. Somewhere Jessica Simpson is all aflutter at this news. Where the hell is that Jessica Simpson anyway?

Derek Jeter and Minka Kelly:: Jeter likes brunettes. Yay brunettes!!! Derek is dating Friday Night Lights cutie (take note Larry King!) and minx, Minka Kelly. The hot rumor is that Derek and Minka are set to wed sometime this fall. (After the World Series of course.) Minka’s reputation is relatively unsullied – but there was a brief encounter with John Mayer. Of course, Jeter tagged up on Jessica Biel way before Timberlake. Seems the pattern is wherever Jeter goes, EVERYONE ELSE FOLLOWS. Justin Timberlake and Jessica Biel: On again, off again. He can’t sing. She can’t act. Perfect pair. She was #2 Jessica in Derek Jeter’s Jessica Rotation. (Jessica Alba being the first.) And for those of you who don’t know… she’s got quite the ASSet beyond what you all already know. Will they marry? Who knows? Who cares? But I’ve got a string of Jessicas going here and two degrees of John Mayer. Bear with me….

Jennifer Aniston and John Mayer: After a brief Pitt-stop in, I mean, with Jessica Simpson to ease her daisy dukes over the loss of Daisy, notorious male slut John Mayer seems to have wooed his way back into the bed of Ms. Jennifer Anastassakis (that was her name before she found fame, a nose job and Pilates). ‘America’s Sweetheart,’ is a close runner up in the Walking Petrie Dish competition. Aside from being the peachy castoff of Pitt, she’s been linked to Vince Vaughn, and more recently the hunky Gerard Butler and Bradley Cooper. (Cooper seems to have cast Jennifer off for the lemon-faced Renee Zellweger.) 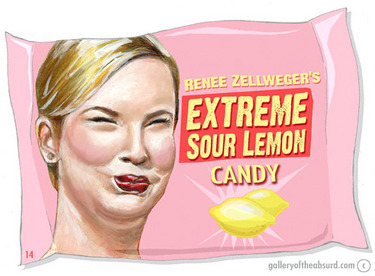 And in case you wondered, not even Borat can beat Mr. Mayer in the swimsuit competition (as evidenced in this photo.)

Jessica Simpson and John Mayer: Former NFL jinx and media muffin Jessica Simpson is fresh off the heartbreak after losing Tony Romo and her other dog, Daisy. Daisy was scooped up by some coyotes in the woods. Jessica put up flyers with a reward for the dog’s return. Clearly she didn’t realize that coyotes can’t read…. that is unless you’re Wile E. Coyote– Super Genius. Then again, it shouldn’t surprise since she thinks Chicken of the Sea tuna is.. chicken.

and speaking of TUNA IN A CAN…

Ted Williams’ Frozen Head and A Tuna Fish Can: Just when Red Sox Nation was getting over the mind-numbing, heart-stopping disappointment of their gigantic choke during TWO last strike collapses of their ALDS series… more bad news: Larry Johnson’s new tell-all book on the cryogenics industry, details how the frozen cranium of Ted Williams was once propped up on an empty tuna fish can and became STUCK to it. In a real brain-trust move, the staffers tried to detach it from the can by whacking it repeatedly with a monkey wrench, sending ‘tiny pieces of frozen head flying around the room.’ Now if those people had some entrepreneurial spirit going, they’d have contacted the brass at Yankees Fantasy Camp and make this part of the full Yankee fan fantasy experience.

Pheromones and science; Even the Super Genius can’t resist: