MJD was referred by Eddiz and will provide perspective on Southern lifestyle and hospitality for MTM.

FORT WORTH, TEXAS – Quick America, yâ€™all [you all] know what sport leads the good olâ€™ USA in average attendance per event and which is second to football in TV viewership? If you guessed NASCAR, you guessed right, Buttercup! Thatâ€™s right, NASCAR.

Drivinâ€™ round in circles, suckin’ up fossil fuels, spewin’ out tons of noise, smoke and awesome wrecks, itâ€™s the chosen sport of my mom’s side of the family. My dad’s side never quite warmed up to it and its drinkinâ€™ class:
JoeBob and BettyLou Six-Pack.

And this portion of America drinks American beer only; none of that left or right coast, blue state, Volvo drivin’, imported or micro-brew stuff. Nope. Bud, Miller, Coors and the like are the preference, thank you very much.

You’re getting the picture, right?

Now, it’s no secret that MeetTheMatts.com leans kinda Yankee (as in Northern – she said with a smile) and last time I was in Central Park I didn’t see any race tracks packed with mullets and tats, so you probably don’t know much about car racing. Down here in Fort Worth we host two NASCAR shindigs a year, in November and April, so The Matts enlisted me and said it was my new duty, for God, Country, The Daughters of the Confederacy, the original Texas 300 and the continued growth of MTM, to give you all [y’all] a primer on NASCAR.

The first thing you must know is NASCAR’s history – how it came about. It started with Prohibition, when some silly Yanks (who talked too loud and didn’t have proper manners) actually made it illegal to drink! This was just plain ol’ country dumb and resulted in some serious shenanigans. You Yanks had your mob types (Eye-talians) like those in The Godfather and Goodfellas, who smuggled booze in from the Canadians despite the cute Mounties, who I just love! But down here, especially back in Appalachia, the locals made their own hooch, called it moonshine and ran it around in modified vehicles to evade The Law. 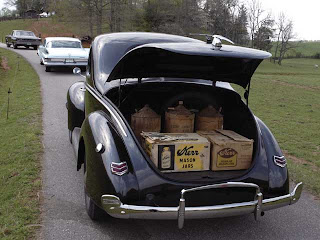 When Prohibition ended our good ol’ boys figured that payinâ€™ them revenuers was kinda like givinâ€™ pie to a fat man, so some took to evadinâ€™ the law ‘n runninâ€™ shine in their souped-up cars. Thatâ€™s where it all started. And it continues. In Kentucky, The Carolinas or Virginia – to this day – people are runninâ€™ shine. They are also runnin’ other things, including the wacky tabacky – Kentucky Bluegrass. CAMP helicopters fly around the fields, looking for the stuff. In fact, the last time I was up at my fourth cousin Jacksonâ€™s place, it was a real hoot. He was cussin’ [cursing] up a storm at the sound of the choppers: “Dang Washington storm troopers tryin’ to tell us what my family can and can’t grow on our own dang land! It’s a good cash crop and ain’t hurtin’ no one.” Sad thing is, I’m not kidding about this.

Anyway… Boys being boys led to much arguing and betting about who had the fastest car and after the World War II, aside from relishing something called a happy ending, they started NASCAR. Credit is apparently given to Erwin â€œCannonballâ€ Baker . First races were on dirt tracks using modified stock cars. Modified stocks continued to be used into the 60â€™s and 70â€™s, when King Richard Petty won more races than anyone else. Now-a-days, the cars are high-tech pieces of machinery that you need a cotton-pickin’ Engineering Degree from Georgia Tech to figure out. But the racinâ€™ is still bumper to bumper, neck and neck and after an hour or so, it sends chills up a girl’s spine – at least this ones.

So whatâ€™s a Race Day like? Well, here in the great state of Texas, me and 212,000 of my friends get together for four days of racinâ€™, drinkin’ anb BBQ’n fun at Fort Worth’s Texas Motor Speedway .

The Infield: Just like baseball, this is where the action is. The roar of the crowd, the smell of the cars and lots of people who routinely get themselves drunker than a skunk. Don’t ask me why but many of the women flash all kinds of private things. Shininâ€™ examples of Southern womanhood, I tell you. And yes, I’m guilty as charged! I’m not in this picture!

When the race starts, it is like a 747 taking off right in your vibrating skull but after about ten minutes or so, with the right mix of sun and drink, it all blends in and everybody continues partying. As for the race itself, it’s all mixed up on the track, so you really canâ€™t tell whose in first without looking at one of the big TV screens, or someones television set up by their RV.

The Wrecks & Fights: There’s always a couple of good smash ups, with cars careening this and that way and flipping over. And the drivers all have a bit of a temper – like their fans – and want to be the cock of the walk. (Yes, I did type that.) So, there are the occasional fist fights just to keep our motors running.

As for rooting, you pick your favorite drivers, of course, but you also pick your faves from the cars. That’s right, we get crazed over Ford, Chevy, MoParâ€¦ Just keep it American! And what’s more American than getting drunk, half naked and getting your fill of cars, crashes, fights and spoils like ribs, fried chcken, okra and collard greens? Did I mention the margarita’s and cosmopolitans? It’s all just lots of fun.

There’s your NASCAR 101 course. Hope you enjoyed the ride! Y’all must come down and try it on for size, Eddiz will be happy to put you up. Have a great day. Oh, and I’m told Cookie’s Corner is at the Pole Position for tomorrow, so come on back!