All hail the Great Babe…

FORT WORTH, TEXAS – Well, weâ€™re twenty games into the college baseball season, and the TCU Horned Frogs are now #4 in the nation. I was watching them sweep Texas Tech last weekend on a nice mid 70â€™s late winter day here in Tejas with my bud – Mexican Joe – and we agreed that the scene was quite idyllic. No floods here. Cold beer and meaningful baseball… The only thing ruining it was the dang ping of those stupid aluminum bats. 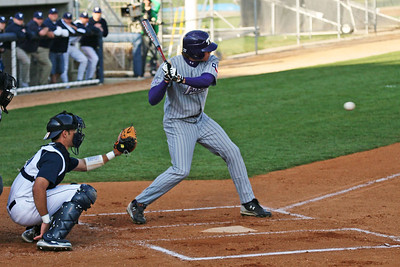 The Froggies taking 2 of 3 from BYU this weekend.

Some things just ainâ€™t right and aluminum bats are one of emâ€™. We both wished College Ball would get rid of them and after a few more pops, got to thinkinâ€™ and talkinâ€™ about what changes, if any, The Bigs should undertake given that the MLB brain-trust has been eying various pitches from their marketing and media advisors re such. All while The Commish prays no more steroid stories come out. Anyway, Mex and I, both baseball purists, came up with one major change weâ€™d like to see in a Back To The Future sense:

Baseball purists have always hated the DH. It eliminates much of the strategy of the game, allows pitchers to become headhunters without any fear of retaliation, and keeps bloated players who can no longer adequately perform in the field on payrolls a few years longer. Winning Managers like Tony LaRussa, think it sucks:

“There’s no doubt in my mind that the game of baseball in all its beauty and entirety is the National League game. I would kick the D.H. out so quick it would make your head spin.”
-Manager Tony La Russa

Supporters argue that it adds more â€œexcitement“, since the pitcher is an â€œempty batâ€ and that it adds more action via increased scoring. Iâ€™m not so sure of that. Statistically, the DH adds about a quarter run to the average game while eliminating a little less than two strikeouts per game. It also reduces bunting and stealing, so for those who like the runnin’ game… Tough crap. As pitcher Rick Wise said: “The designated hitter rule is like having someone else take Wilt Chamberlain’s free throws.”
(2 down… 19,998 to go, Wilt).

Itâ€™s not like the modern day players are having a hard time scoring runs, given the small, hitter friendly parks that have been constructed over the last two decades, better training, better scouting via techniques like video tape, and even more efficient bat design with a larger sweet spot. The average runs scored per game is up almost a full run in both the NL and AL since the late 60’s/early 70’s. They’re launching shots out of New Yankee Stadium faster than a banker says “no thank you” to a loan applicant.

The DH a does not draw more fans. Fan attendance and television viewership differentials between the NL and AL are statistically a wash….fan interest is correlated with winning (duh), history of the franchise (double duh) and to a lesser extent factors such as weather, overall economics of the area and attractiveness of the stadium/ballpark. Studies have shown that the DH does not actually increase fan interest…think of it, would a fan like Yankee Joe abandon the Bronx Bombers if the AL got rid of the DH? Doubtful.

The DH appeals to those too lazy or too dumb to keep score; none of those messy double switches, multiple pinch hitters, hit and runs or other such stuff. Just git up tharâ€™ and take yer hacks. Itâ€™s another symptom of an ADD-addled population trained via television and other multimedia, to demand constant stimulation. We are addicted to intellectual cotten candy spewed out by the various tabloids re the “star” of the moment.

God damn! I need another face-lift?!

These are the same forces that have brought us other â€œinnovationsâ€ which â€œimproveâ€ our game experience. Constant, loud, and very bad rock music blaring at the decibel level of an airplane during takeoff during every single pause in the action. Dumb-ass mascots who prance around on the dugout and get in your field of vision during the game. $100 bucks for a box seat so some dopey mascot can stand up in front of us on the dugout all game long… Great, just great.

Certain sports are timeless. Iâ€™m certainly not a fan of futbol and just an occasional watcher of golf, but can understand the love that their fan base for those games has due to their unchanging nature; a game played now is as it was years ago.

Baseball is like this. One of the things Iâ€™ve always loved about baseball is its continuityâ€¦ You watch a replay of the 1969 World Series series on TV and, other than the fact that they wear their sox a bit differently now, the game is the same. The same can’t be said for American football or rugby, where the rules have changed so much that a game now holds scant similarity to the contests played 40 years ago.

So, letâ€™s get rid of the DH and play some real ball. Since, as the following video proves, pitchin’ can be excitin’… And I dare ya not to tingle watching it even though you know the outcome.

Oh, and can those frggin’ aluminum bats in the school leagues while we’re at it…