Folsom, CA – As I spent a lazy Sunday afternoon watching the Mets game, the SNY camera crew focused on a woman in the stands who seemed oddly familiar. Just then Keith Hernandez solved the mystery by asking “Isn’t that the woman who used to roll her arms behind home plate at Shea?”

Sure enough he was right. If you watched Met games in the ’80’s you must remember this woman. You’re never too old to Rock N Roll

That got me thinking about some other fanatics that have worked their way into our lives simply because they show up at games and do ritualistic things. The Yanks have poor pathetic Freddy Sez who has been haunting their games for the past 30 years with his pan and spoon.

The Jets have their insufferable, camera loving Fireman Ed who makes rooting for them nearly impossible. I think the Mets still have Cowbell Man patrolling the stands but with the terrible configuration of Shea Shack who can tell. The Broncos used to have a real mountain man in the form of Barrel Man who would show up to their games wearing only a barrel, a cowboy hat and a pair of boots.
(Right: Cookie’s Orange Crush)

The list of these fanatics goes on, but they all pale in comparison to one Rollen Stewart. Rockin’ Rollen was a fan of the Lord. If you watched sports between 1978 and 1990 you couldn’t miss him. He was the master of getting himself on camera. As a Ram fan I remember him doing a dance on camera wearing his rainbow wig during the 1980 Super Bowl. At first he claims it was for the fame and of course the chicks. But after the 1980 Super Bowl he found the Lord. Suddenly it all made sense.

Rollen was out to camera bomb every event possible in the name of the Lord. He did a good job of it too. He was front and center at the Kentucky Derby, Indianapolis 500, World Series, NBA Finals, World Cup Soccer, the Masters and countless NFL games. Damn if every sports fan didn’t know about John 3:16. It wasn’t all about sporting events either. Soon he was on camera for the Lord at Reagan’s inauguration and Prince Charles and Lady Diana’s wedding. Oh, how the Brits were aghast?! Then things got nutty. In attendance for Game Six of the 1986 World Series he was upstaged by a guy named Mike Sergio who incredibly parachuted into Shea Stadium during the game. 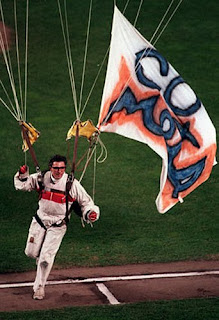 …and his hair was perfect

Rollen choked his wife after the game because she held up one of his signs in the wrong place. I think he wanted it between Buckner’s legs but maybe I’m off on that one. From there the cracks began to show. In the late 80’s he was suspected of setting off a series of stink bombs including ones at the American Music Awards and the 1991 Masters. As fate would have it rainbows were now become a symbol of another (less religious) movement. Rollen’s signature hairpiece led to some uncomfortable situations for him at the 1990 Gay Games. Even the fabled Rainbow Warriors of Hawaii had to find another nickname for themselves.

By 1992 he was divorced and living in his car, having spent all his money driving around the country attending these sporting events. In September of that year he went completely off the deep end. He took three people hostage near LAX in an ill-fated attempt for more publicity about the ensuing end of the world. Having rejected a plea bargain of 12 years Rollen instead decided to go to trial and was shocked to learn that the guilty verdict handed down would mean he’d spend three consecutive life terms behind bars. To this day Rollen spends his time at Folsom County Prison ranting to news organizations about the end of the world. One of these days he’s going to be right.

Angry Ward tomorrow, if there is a tomorrow…